Dating is hard. Can you keep up?
Submitted by jcbcroft — 22 hours, 43 minutes before the deadline
Add to collection 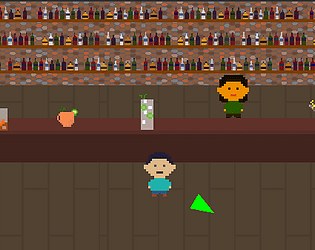 This is a very interesting game!

I don't think this is the intended design, but I've discovered surefire strategy to get at least 2000 points:

This might also be a bug, but after a few more replays, the orange-hair girl just refused to talk to me (maybe she found out about the double date, I wish the guy best of luck)

Anyways, Thanks for making this game! I've had fun and I hope you had fun while creating this!

Lol congrats on breaking my game. Yeah, the state machine I built is a little finicky about the order you do things in. Right now you have to finish the task your arrow is telling you to before moving on to the next one or the game will just take its ball and go home.

I had an issue with the game not properly resetting (see V0.2 update) but I thought I fixed it. Looks like you proved me wrong, as I was able to replicate your issue after breaking the game in the way you described.

After doing some digging I found the game doesn't reset what drink it think's you're holding even though it resets the icon. Was a quick fix, I'll be sure to release the patch after the jam ends. Thanks for the free QA!

I also patched your little exploit for good measure ;).

Alright, the patch is pushed and I credited you in the devlog. Thanks again.

Great premise given the theme. It turns out I'm absolutely horrible at living a double life and ended the first game with zero points.

Thanks for putting the little green arrow; without it I would have floundered trying to find each person's table.

Music got a little repetitive, but hey, it's a game jam. Art is simple but gets the job done, and there's an interesting scene with a variety of people and items.

Thank you! The art was all my girlfriend. If you like the cocktails and bar backdrop we will be putting them on OpenGameArt after this. I'm excited to check your game out!

Congratulate her for me! I hope yalls keeps making games!