Explore a broken world on your very own airship! Made for the OGA Summer Game Jam #2
Submitted by RedVoxel — 2 days, 1 hour before the deadline
Add to collection 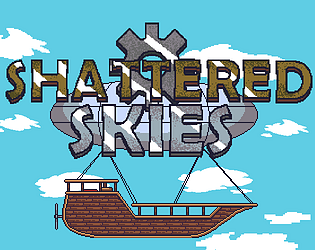 thanks for participating!, don't forget to rate the other games, and nominate your OGA favourite.:)

This is a really cool game! I would love to see this expanded upon, to be something like Lovers in a Dangerous SpaceTime. Only complaint I had was death didn't reset cannon balls and I didn't know where to go vs where I've been, but it all worked out in the end. Love this!

Submitted
The Psychopomp
LikeReply
with the love studiosSubmitted3 years ago

wow!  This is a really ambitious game for a one month jam!
And I'd say you got a pretty good start on it for just a month.

about the map, I don't mind the lack of mini-map, I am not a big fan of those anyways.  But it would have been nice if the full map filled in after I visited areas.  Just having it always blank is kind of a bummer and not overly helpful.    I did like finding the torn map and having it point me towards the temple.    That was really cool.

I figured out how to swing the pick axe but only after I realized I had to equip it first.  Consider having the sword and pick axe equipped from the start.

I really dug the contrast between wandering, exploring and mining the big bright outer world and then platforming in the cramped dark temple.

For me, the platforming in the temple (I got to the on in the lower left of the map) was really way too hard.   The vine jumps in particular were hard.   They're not impossible by any means, but they did require pretty precise timing for a first temple.   I would suggest dialing them back a bit (giving more overlap between when the different rows appear/disappear) and then slowly ramping them back up as you get deeper into the temple.

well, just my two cents.  Overall, I'd say great work.  This is seriously /a lot/ of game to attempt in one month and you got a lot of it right.  Color me impressed!  :)

Thank you for your kind words! I agree with your critique, and if I ever make an update I will take your feedback into consideration :). (Side note: I was WAYY to ambitious while making Shattered Skies,) I had plans for research maps which could unlock new crafting recipes,  I had an idea for ancient turrets that would appear after you've completed a temple, to make the game more and more difficult. The temples were also supposed to be a lot bigger with different paths you could take kind of like a metroidvania game. I also wanted to NPCs which you could trade items with and so forth. Also, the growth temple is supposed to be the second temple you find, but I kind of messed up the placements of the torn maps.

Overall a great game, very well rounded, I LOVE the exploration. man. all I can say is great work!

I like the atmosphere of this game, and I think there are a lots of undiscovered things in it, but I got angry after 10 mins, because:

Submitted
The Legend of Sara
LikeReply
RedVoxelDeveloper3 years ago

Hello and thank you for playing Shattered Skies!

thx! I will give it an another try today!