Take Me to a Better Place...View game page

A lonely suicidal girl gets taken to another world and experiences the transformation of a lifetime!
Submitted by Kreastricon — 1 hour, 46 minutes before the deadline
Add to collection 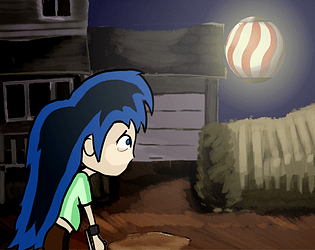 Take Me to a Better Place...'s itch.io page

I really liked the visuals, They are really good looking. The intro was a little unconfortable, but after that It was a really enjoyable experience. Really liked the theme use, great job!

Submitted
The Horror of The Vigil
LikeReply
KreastriconDeveloper322 days ago

Thank you, much obliged.

I almost didn't make it past the opening, but I'm glad I did.  Beautifully drawn, but text/reading games aren't my favourite, and there wasn't any skipping.  Also the page screenshots didn't give any clue about the platforming aspects.

I think just speeding up the opening would make a huge difference. I love the idea of her 2 worlds, one real, one better. A lot to build on here, looks great!

Thank you for giving the game a chance. I still want to make this a bigger game, I'm working on it as we speak.

It was obvious that a lot of time and effort went to the visuals because they turned out really well. The character animations were smooth and I liked all the outdoor and landscape scenes. Although I did feel iffy at first with the intro sequence and that thing in the shed so the quirky and ridiculous turn of events really caught me off guard. Pretty well crafted nonetheless!

Thank you. I'm glad you liked the visuals, I just wished I had more time to make more levels.

I gotta admit, I was a little off-put by the beginning, but when the game 'transformed' I didn't feel so bad about it anymore. Incredibly adorable, and cute.

Really nice art style and presentation, the backgrounds were fantastic the animations on the character was also really well done, I would just be a little more careful with the writing especially when dealing with this subject matter. I also experienced a crash in the game I'll add the log in a comment below.

of Keyboard Event for <Right> Key

It looks like what happened was that you pressed the right key, the variable "Mobile" wasn't declared.

That is so weird! She seems to function fine without "Mobile"... at least on my computer.

I don't know if I fixed it because I don't know exactly how it happened, but I put it in. I'll upload a patched version soon.

Thank you for your kind words. Some people don't appreciate how much work goes into animation. It can be really grindy and exhausting but it is so worth it in the end. I'll put a warning in the intro about the content and the option to skip it.

Sensitive material here, just warning for those, who might feel uncomfortable!

Basically, the game jumps to the end really fast, as concerning the story. It deals with difficult theme of depression and overall lack of motivation, the reasoning behind being alive. Really somber beginning and when you actually get to the gameplay, it crushes your spirit by involving a character, who is, well not going to spoil anything.

I liked how the game had a design of it's unique environment, although the hot keys were little hard to figure out at first. Definitely, the one part that shines for me in the game is sound effects and overall tone, rather than that, it bites more than it can chew, I think.

It just occurred to my I never responded to your comment, I want to thank you for your kind words. I'm kind of surprised that you like the sound effects in my game, personally I felt they were kind of weak because there really wasn't that many in game. Maybe the choice of what sounds to play was key.

I did bite off more than I can chew. I was thinking to myself I was trying to sell the concept of the game rather than the game itself since I didn't have a whole lot of time to work with.

Your game was fantastic, I really loved it. My first thought were as I commented above, but sometimes with games, you have to replay them to actually go deeper, like a movie, you know. I think my second playthrough was amazing and I appreciated it more! Amazing Game!

Don't you just hate it when your working two weeks on a game only to realize it's only like ten minutes long?

Well, that's what happens when you think you have time for hand drawn backgrounds and animations.