Find the cat by changing dimensions
Submitted by Faiorb (@faiorb) — 27 minutes, 31 seconds before the deadline
Add to collection 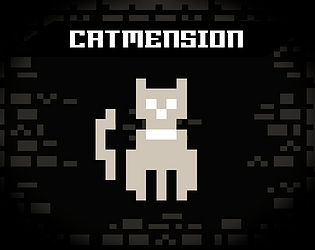 Good mix of 2d and 3d. The puzzles were clever. I tried not to cheese it with the "features". It left me thinking, was I the cat all along?

When I run the linux version (on Arch with an intel GPU) it shows me what I assume is a glitched splash screen and hangs using 100% of one CPU. Looks like this: 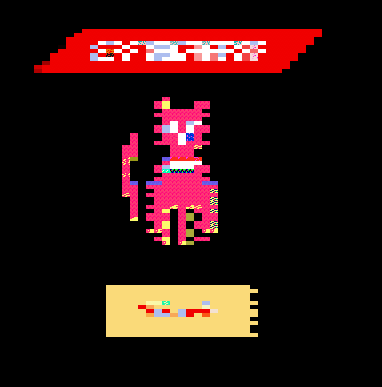 Oh! I don't really have a good way to debug this for the linux version, so I have no idea what is causing it. And yeah, this is the menu screen all messed up, with the name, the cat and the button to play the game. I would ask if you tried the play the game, but I guess it could not run well too :/

Yeah, I wasn't able to play. It was completely unresponsive.

I'd just like to state...that image looks so cursed and it's brilliant.  Sorry about the issues though =\

This needs more plays from more people.  Yeah, it's rough around the edges, but the mechanic, the "feel" (jank means charm to me lol), and the puzzle designs were great!   Diamond in the rough.  Honestly the game gave me a bit of a creepy vibe and I dug that too!

Really appreciate your kind comment. And yeah, if you say that jank means feel, I need to agree that this game has a LOT of feel hahah. Thank you for playing!

In advance I want to say thanks for respecting players' time since it's just a jam!

I really adored the dimension change mechanic. I must say without much polish it was a bit difficult to understand where you will appear after switching back to 3d, though, so a few times my ball got lost because of confusion - but it's ok since you did not have much time for polish. Also the ball movement is... well, you know it's buggy.

I'd really like to say more or give you an idea on something, but sadly the game is so small that I can hardly offer anything apart from my small praise.

BUG: you can jump while in air. I used it a few times >:) because buggy ball wasn't moving the way I wanted.

Overall, you did a good job! I indeed liked the game! If you ever make a sequel or sth similar with this dimension change mechanic, I'd like to see it! Also I humbly want to ask you to play and rate my game - I'd be very glad if you did!

I have noted at least 2 or 3 bugs with the ball alone, so this build has a lot of... let's say, features 😶. And good to know that you were the first one to find out about jumping in the air. You have no idea how I tried to fix it without success LOL

Thank you for playing! Soon enough I will play your game, for sure!

This game is very clever, I loved the style of the 2D world and having the 3D world alongside it is ambitious, but you definitely pulled it off. To improve, the ball is very fiddly to get on the buttons so maybe consider making that easier. The player also teleports around a lot when changing dimensions, which confused me at first because it felt like the level was restarting and I didn't realise it was the same world.

All in all, this is a great game. Well done!

Fun fact, I reduced the button trigger area because I thought it was too big, whoops. And yeah, the way this game was built, it lead to some confusion, so don't worry. Thank you!

The idea & some of the implementation is there - I like the general cat-chasing premiss and I think the 2D/3D flipping was a really cool thing to add in. That being said I did find myself quite confused/disorientated by the sudden snapping up & down, plus the general feel of movement was rather slidey. I thought the lights that can be used as points to figure out where you've been is good, albiet not fully realised given that the levels tended to be small.

The fact that you chose to do a 2D/3D hybrid shows promising creativity. This game may not be a highly polished, good looker, but you should still be pleased & carry this experience on to the next one! Good job :)

Thaks for playing. I figured the flip mechanic is somewhat too abrut, maybe some animation or some way to show the world flipping would help to not make players fell sick or confused 🤔. Anyways, I had fun making it (Fun fact, I also plan to post a devlog about the development, and I am going to update the game page). Thanks again

It keeps crashing for me since I was converting it from Windows to mac. Would you mind adding a mac export?

Page updated, you should be able to play now

Thanks a lot! Works like a charm! The Idea for the game was pretty neat and I liked the freedom you get with the game mechanics, though the gui was  a bit small and I kept missing. Overall, awesome job! A 3.5-4.5 star game! Well done!

Ok, good to know you were able to play now!

Thank you for the feedback. The UI was the last thing I put together, so it is all over the place.

Welp, I guess that's what jams are for! Sometimes UI juice can liven the gameplay itself! Hey, would you mind rating my game too in the meantime please?

Don't worry, I will rate your game. I'm only doing at my time, but soon enough you will see my kong face in your game too.

Quick update, I changed the game page for you all, with a gif to know what the game is about

The idea is cool. Took me a while to understand what was happening, but don't think that's a bad thing. The last level ended kind abruptly though, didn't feel like i had completed it's puzzle.
Would love to see a version of this that explored the mechanics a little further!

Thank you deLima. I, in fact, was thinking in some other mechanics, like a teleporter, one way pass or a ball-only room, but I decided to keep it simple for my own sake!

And I think something was left to do (For example, find more balls to reach some trigger), because the final screen has a message on it. Or maybe a bug? I will take a look to see more about this, for sure

I thought the use of the art asset was pretty cool. As was the switching from the 3d to 2d space and visa versa. But in terms of game play, I was left a little confused on what to do. I was stumped on the third stage, and couldn't find the answer to the puzzle. This may just be me being bad at games, but hope you fun during the jam!

Thanks NelNel! I was happy too with the switching mechanic, glad to see more people thinking the same, nad I hope you had fun as well.

And I kind of agree with you, I may or may not have made some stages a little too hard ;)