Save the last frog in the pond from the despicable Dr. Crapaud.
Submitted by Mitacla — 39 minutes, 9 seconds before the deadline
Add to collection 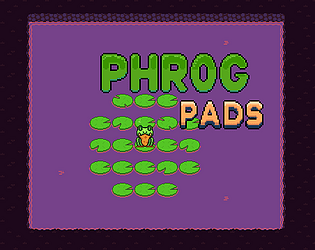 Use of the limitation
This is a one-level boss fight!

Nice game…. And liked the unique concept… Some movement and catching mechanics could be improved upon… Rest it was a fun gameplay… Keep it up… :)

I really really liked the movement limitation mechanic, spicing it up with robo frogs was pretty cool, too!
At first I felt that floating rockets were a bit rare, but after a bit I understood why, because it sure made things more tense as the boss started launching more missiles and more lily pads started disappearing, nice balance!

Glad you got the idea behind the project. Thanks a lot!

Ok I just tried it for a while :) The first thing I thought I had to do was to catch the rockets while they were falling down, which obviously didn't work, until i saw the first floating rocket and managed to get it and shoot it. Then i immediately got hit by a laser, with no warning so it felt surprising, but I learned to look out for those frogs on the edges of the map. Most of the time the rockets appear very far for me to get them, so there's a lot of waiting involved, limiting the range where they can spawn depending on where the player is would make it more manageble :) All in all, add some visual cues to the laser preparing to shoot, limit the spawn range and you got a pretty cool boss battle! I gave you 5 in concept because it's clever how you have to manage your lilypads to allow the rockets to float, but you also need them to walk on. Good job :)

Yeah, since both the bullet frogs and the laser frogs, these ones could use a bit of an extra warning. It is curious because, during beta testing, my friend was questioning why he was losing lives, and it was because, when the frog was in the laser line, as soon as the laser was created, the player was immediately hitted, the life lost, and the laser destroyed. So, I ended up playing with the sprites and masks to allow the player understand why he lost a life.

In general, my idea for playing the game was 'when you see a phrobo, avoid that line because you don't know what kind of attack it does'. But yeah, maybe a small inoffensive dotted line at the beginning, before shooting the full laser, might be helpful.

About limiting the range, I will have to think better about that, since I don't have an opinion for now!

Wow!  Really well done boss rush thing with a clever movement mechanic under it with the disappearing lily pads.

I enjoyed it a lot, I thought it was very well put together and clever all around, the way the lily pads make you think about where you've already been, trying to setup routes that won't screw you over and reacting to how the missiles could block you in is a lot of mental work for seemingly very little, which to me, is the key to the golden gate that leads to game dev paradise.  It's a really smart game, think you should def continue expanding on this idea, even if it's not frog related.

My only qualms are that the rate at which a defective missile drops is too low, I feel like I'm just waiting around which gives me the feeling that the game is trying to artificially make itself last longer, which doesn't seem necessary.  I think adjusting this so that every x amount of bombs there will always be a defective one would go a long way in making it feel like every attack is an opportunity to retaliate.  Take this with a bit of salt as this may be your intended design, to constantly hope for a defective bomb & not know, I just wasn't really feeling how long it would take before they would spawn, obviously the more patient I have to be, the longer I have to spend in a barrage of bullets lol.

The other one has to do with just not understanding the rules, at seemingly random I got hurt?  It's like if you're sorrounded by no lilypads to move into, that counts as damage.  It just seems unnecessary, and comes out of nowhere.  Made it feel unfair and ultimately was the reason I didn't finish the game.

Lastly, just as a sound-designer & musician, even though I like the sporadic piano noodling over the game, I feel like something with a more solid beat that got you pumped up and was synced with the flow of the game would've added to the intensity of the boss rush.  I wouldn't mention it usually, but with games like this the music actually does have an impact in keeping your heart rate high enough.  Something to consider, nothing wrong with the tunes.

That being said, over-all, I enjoyed a lot of what was going on.  Great job!

(BTW, It seems like your game is criminally underrated for the quality that it has, I think you should consider making an HTML5 build and putting it up, I think thats why you just haven't had many players/ratings.. no one wants to download.)

About the rate of defective missiles, it might be low, but they are not 100% random. I programmed something like every x rounds, drops 2 or 3 defective missiles. I thought, if every round (during a same life sub-level) the player gets defective missiles, than all the patterns that I created would have been for very little. I went for a curve of difficulty that makes both those missiles more rare (higher x) while also creating more complicated patterns, to balance the overall tension!

Maybe the last life might be the more problematic one, since I think the boss drops defective missiles once every 6 rounds. It is a lot of round, yes, and the patterns are the hardest one (it is the last life), but I ended up compensating for the high tension and the difficulty of catching some missiles by giving many extra lifes to the player during that round.

About losing lives when surrounding by zero lilypads, part of the game is the strategy of controlling the number of lilypads you have in play. You can easily get trapped, not because the level of randomness of the game made you trapped, but only because you decided to get in a bad situation. I understand that, in the first case, you losing a life might be frustrating, but, in the second case, it is blame on the player!

Last, about the music, yeah, sound is my weak suit in these projects. The soundtrack music is highly inspired in a much stronger music, that I tough would be ideal for the game. I really wanted to use such music, but I don't have the rights to it, so I had to work around the best I could!

Nice game! I like how the difficulty scales. One note is that could use a little more sound and visual feedback.

Thanks! Yeah, sound is not my strong suit, but I will try to improve that a bit in a next update for soon!

Really, more boss phases? Like, I thought 10 would be a nice number, to make the game not too big, but also because I didn't had more ideas to use as 'weapons', so it would start to be very repetitive. But thanks a lot!

Submitted
Save That Frog!
LikeReply
MitaclaDeveloper1 year ago