Both Sides of the BugsView game page 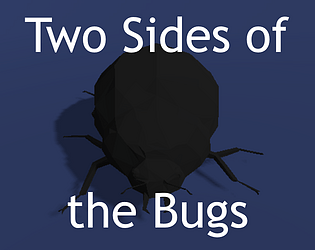 Both Sides of the Bugs's itch.io page

Use of the limitation
You are the worst pirate in the galaxy.

It was fun but the bugs seem more like the enemies to me. But really nice concept 👍

I have cleared the game. I'd like to write down some of my thoughts.

First of all, there is almost no feedbag for the fact that the gunshot hit the target. This should have been represented by some kind of effect, which would have had a significant impact on the playfeel.

Having a variety of weapons and enemies is a good thing, but I didn't think it was well integrated into the gameplay.

A great example of this type of game is "Serious Sam". In that game, the player has to use different weapons for different types of enemies.

On a related note, the game was monotonous overall. Especially after Wave 20, I felt that the game was just repeating the exact same levels over and over again.

But is this monotony something that can be solved by adding more weapons and enemy types?

I don't think so. The variety of weapons and enemies in Serious Sam is similar to that of this game, but I rarely found it monotonous to play.

The reason for this is that each level gives the player a completely different playfeel, depending on the combination of enemies and the type of gun you are carrying.

It's a long story, but overall I enjoyed this game. Good job!

The game was pretty fun enough though I don't usually play FPS. Then I discovered that I could just stand on the level geometry and shoot down at the bugs. Which I did for the rest of the game since playing games the dev-intended way is for losers :P

First of all, I found the introduction very cool ! But I think that this is the only place in the game where you feel like the bad guy.
For the gameplay, I agree with the posts made earlier : a background music is important, and the limitation isn't very present, and it was also kind of boring after the wave 15, maybe you should have added another map and make the wave half as long ! It would have been refreshing I think.
At the beggining of the game, I had some fun tho ! Overall I'm mixed

Thank you very much for your reply! I really wanted to add some music, but I didn't have time for that. I also agree with all of the other points mentioned.

Overall a bit to generic and the "evil" limitation feels underused. Having to kill some peaceful bugs with each wave or such could have underlined that you are the evil one here.
I do quite like the little touches though, such as the fancy weapon spin reload animation, the clear communication of the different bug types or the clean visual style.

Thank you very much for your reply, I will make these changes if I will want to make this a full scale game!

I think you made it go for too long. I got bored around wave 11. For a game jam, I think you'd want your game to show everything it has to offer faster than this.

Also, the little red bugs feel like they're a bit too fast. It makes them feel like cheap difficulty.

I feel like you're not making much use of the limitation here, though. That's a bit disappointing.