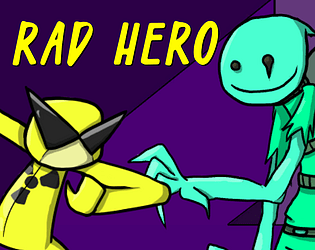 Use of the limitation
Mouse only controls, one hand

Very good game! I really like the radiation and how I have to pick when to heal against dodging and stacking damage. Nice job!

If you could give me a rating/feedback on my game it would be much appreciated! :)

Submitted
Another Day At The Office
LikeReply
JargonlosterSubmitted1 year ago(+1)

Really cool game, I love the presentation. With some tweaking, more enemy variety, etc., it could be even better. Obviously you were on a time-limit though!

I really love the visuals and the sfx are nice, good job!

great artwork! always a fan of turn based attack systems this was well done and challenging

I think you did a good game Prinny, I was gonna give a review after I managed to beat the third creature, welp I gave up on that otherwise it would have taken me ages to do so, so that's a positive.

Your game is very nice, the amount of polish is very high (as usual), the mechanic is very nice but also very stressful, you don't know if you'll have to vent or if you're safe to attack due to the randomness of the attacks (a possible 300 damage is a bit much but it didn't happen to me so that's good lol).

Overall a very nice and enjoyable (even addictive) game, I'd play it more if I didn't want to rate other things as well! Well done! It was nice developing both of our games and chatting about it, I loved it

Loved the rad mechanic it makes for interesting gameplay. Also the game is well polished from the UI to the character animations. Only small downside is I think the combat start to become a bit too long after health increased but this is just a matter of tweaking.

I think you could exploit the radiation mechanic even more :D (like putting some non linear evolution to push the player to try and reach high level of radiation or something like that).

Overall great experience which could become a really interesting game with some more content! Keep it up

Really neat game! Using negative effects as a resource feels clever. The system has potencial, keep up the good work!

I loved this take on the typical gauntlet-style turn based battler! Having to balance your health and radiation was a neat mechanic and having new skills every time you beat an enemy added some nice flavour too, along with the scaling enemy HP to keep up the challenge. Some variety in enemies, attacks, etc would've been nice, but like you say, 3 days is short, so it's not the end of the world. The enemy attacks did feel unfair at times - sometimes they would deal only 50 damage, sometimes over 200 - although once I figured out that you could see their attacks and plan ahead that helped with that problem. Some of the battles did also seem to drag on for a while, especially later in the game, so decreasing the health or increasing attack would probably help make things feel a bit more fast paced there.

The art was great, too. The characters looked nice and their idle animations helped add a bit of life to the game as well. The UI was brilliant, and it did feel very polished - even more impressive for a game made in 3 days, so nice work there! I loved how the UI was in the game world too, with it being on ropes hanging from the ceiling. It was a small detail, but I liked it.  The sound effects worked well too, especially on the UI, and the music also was a nice backing track - although it didn't loop for me, which was a slight problem.

With that all being said, I think it was an brilliant game for 72 hours! The gameplay, the graphics, it was all well thought out and well implemented, so you did a great job! Excellent work!

thanks for the comment, I think your right about increasing the damage of the attacks that would be a great way to keep the pace up without it becoming a grind, I was short on time and didn't give much thought to the difficulty scaling and it shows haha! sad to hear that the music didn't loop, I will be sure to look into that.

Thank you very much for playing and enjoying!