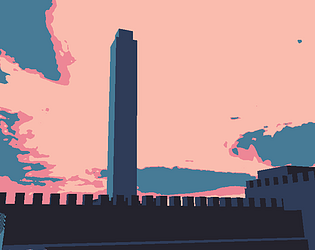 Use of the limitation
You collect colors, and you can only see the colors you've collected. There should never be more than 5 colors on screen at the same time. Anti-aliasing, filtering, mipmaps etc. is also off.

Very Cool Game . Its a piece of Art.

Submitted
Out of Power
LikeReply
mardennSubmitted1 year ago(+1)

This is a beautiful game. The music and visuals were really nice. Unfortunately, the audio on the WebGL version didn't work for me and it seemed to lag sometimes, but everything was fine on the Windows version. I loved the concept where the rendering of the game changed how you were able to see the environment.

Great artstyle and use of the limitation as mechanic for the game.

cool concept, great use of limitation

I loved this game! The artstyle was very nice, especially the palette, and the gameplay was simple, but still engaging. I did get stuck a few times - the beginning was a little confusing, and when collecting the square in the shadows I got lost, since everything was the same shade of purple - though I suppose that's more a problem caused by the limitation, not the game. Some sound would've been nice too, although at the end it did mention music which I couldn't hear, but that might just be a problem on my end. It was a great game though, good work!

Thanks! Shame about the audio. WebGL is hard :(

Yeah, not really sure what to do about going into the purple shadows… Some people seem to love the puzzly challenge, while others think it’s unfair. I guess I need to find a way to make it easier without completely handholding the player.

The game could use more onscreen guidance. I almost gave up before I entered the first area--It took me a while to figure out that the white shape was the level at a distance; I thought it was the cursor.

In case you're keeping track, I had to download because the browser version is too slow.

A friend of mine also had that problem with not understanding the controls. Scratching my head how to make it more intuitive once the rating is finished.

Also thanks for reporting on the performance. I suspect more people have issues cause the view/download ratio on the page is a lot higher than usual. Guess I’ll have to do dig up the profiler.

This is gorgeous! The level design here is really top notch, especially with the way all the shadows interact. I'm super impressed by this game! I did get stumped by 2 of the 4-color locations (I trial and errored my way to walking across the ledge), but yeah this is a fantastic design

I super love the way this game looks and feels. I think the concept goes very well with the cell-shaded, Dreamcast-esque look. Figuring out to go was very rewarding, I enjoyed following the shadows, specifically. Good stuff!

I really enjoyed the level design in particular, with the way that the shadows/shading lead the player to the different palettes. (Had a bit of trouble finding the last color of the four-color palette but in retrospect its location was very well thought out).

Yeah, it’s pretty easy to get lost at that part. In hindsight, I guess I should have added more patterns/detail to the path to make it slightly more “interesting” or eye-catching to prompt the question: “Where’s that path going?”