Save the Earth from the invasion, one mission at a time
Submitted by BrazMogu (@brazmogu) — 5 hours, 7 minutes before the deadline
Add to collection 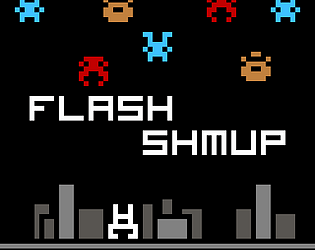 Challenging, well made game! I included it in my compilation video series of the Low Rez Jam games, if you would like to take a look :)

Nice innovations on a classic. The timer and the random enemies add good tension. Modular 2d graphics is hilarious. Love2d was the first game engine I ever used. Made me miss it.

Fun game! I loved that you included two different visual styles, almost like you had a "remastered" version at the time of launch :p

My one suggestion is changing how the levels scale. Initially, I had three waves of two blue aliens in a row. I wasn't actually sure if I was advancing levels. Subsequent replays showed that these were random waves. Maybe just have hand-crafted waves? Sure, that means you couldn't have infinite levels, but I think it'll make for a better experience overall.

It's nice. Two modes looke nice in their unique style. Would be nice with some audio feedback on shooting etc. Music is great.

I find it strange having to choose between two graphic styles, when they are both nice. Why not, I say. But what style I must rate, in the end ? The default one ? My "personal" choice ?

Except that point, the aesthetic is good. But there is no sound (except the cool music) which penalizes the feedback of the action.

But the biggest problem of this game is its levels. From what I understood, levels are randomized. However, it happens that I encounter some blue moving aliens in the first level, before fighting the static brown ship in the second level. The first level - my first play - was hard, when the second level was really easy. Two or three levels later, I meet my first red guy, which kill me in one hit.

I'm not saying that the game is really hard, but levels are unbalanced. Sometime you feel you are very good, but in the next level, you can be f*****. Or vice versa.

By the way, the gameplay is classic "space invader"-like, but this is not bad. There are challenges. Nevertheless, I feel like this can be a very good little game if there is a true progression curve.

lovely game, gameplay and sound quality is just awesome, i really liked the two graphics mode where one is, old style and othe one is fancy.