Submitted by oniisan-studio — 2 hours, 10 minutes before the deadline
Add to collection 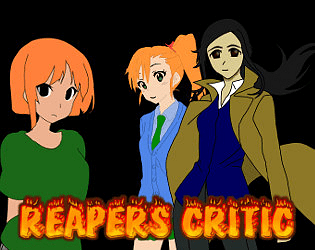 I don't have a Mac to test the audio but I will try to ask a friend if he can reproduce the same bug.

Super original and inspired story. I really enjoyed it, thanks a lot for sharing!!!!

Thank you, I'm happy that you liked the story!

This was a great story! I wish I had a "Story" category to rate here.

It was indeed a bit rushed at the end. Perhaps a better idea would have been to leave it open rather than instantly resolve the plot, not sure.

I missed some time to really put the ending that I wanted. You have a great idea that I didn't thought about ... an open ending ... I will keep that in mind for some next Jam.

This was quite a experience. It grabbed my attention since the beginning. The characters personalities are quite well written. I'm not sure about what to think about the ending, though. It felt a bit rushed.

On the down side: Reapers Critic is good as a small visual story, but it doesn't have too much gameplay yet.

[MINI SPOILER ALERT] There's an important inconsistency in the beginning of the story. If I recall correctly, when Minami calls Arthur for telling him about the new crime, she mentions the 30 secs app during the call. However, Arthur is surprised when she shows it to him in the crime scene. I don't really found that natural. [MINI SPOILER ALERT]

Thank you for your review and I'm happy that you liked the story. It's true that the ending was done quickly to finish the game within the time limit.

Really unusual approach to the theme, not what you would expect. Overall, interesting and I enjoyed it. Thanks for sharing :)