Dash and slash your way through rooms of enemies
Submitted by HenrySneeed (@henrysneeed) — 4 hours, 4 minutes before the deadline
Add to collection 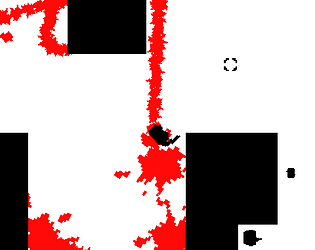 This game is very juicy. Probably one of the better feeling games in the jam. It's got a lot of style and the sound/music is good (aside from the short loop).

My biggest complaint is the enemy attack hitboxes feel a little generous for them. It feels like they can hit you way more easily than they should be. As a result, I felt like the dash ended up being pretty useless outside of getting back to the door quickly. Otherwise, it's a pretty neat game. Would love to see more!

Sadly the game is so fast paced, the time limit never was a real thing.

The artstyle was awesome and an excellent choice for this game I think.
The blood splatter and the sound effects provided good feeback and made killing enemies extra satisfying.
Maybe it's a LITTLE too fast paced? But perhaps I just need to get good haha

I've never felt more like a spinning murder top, but I've never clicked outside a game window more either. From the screenshots I though you dashed along the blood streams like a slip n slide, which should absolutely be its own game, by the way. I never felt in control, and I wanted to so badly, because just trying to be in control was fun (I'm getting Rocket League flashbacks). I think you should get one dash and have to wait to dash again till you reach a wall or whatever exactly made me stop mid-dash. That thing should have a clash sound and an animation, too. A second dash could be marked with another right click and shown with some sort of trail like in a billiards game. I know these are unreasonable things to expect from a jam game, but they'd be cool additions.

Love how the game looks. Also blood splatters are awesome. Why do you have 20 seconds instead of 30 though? :P

Also I found the game quite hard. Maybe a couple levels of small introduction and overall difficulty decrease would have been nice.

But nice game overall, I enjoyed it :)

Know that feeling. I do that ALL the time. I get super good at my games and then people find it super hard. I started getting better by having a friend testing it in front of me without mw giving any feedback.

I loved the game very much and I want to see this prototype to turn into a real game..