​A mini RPG where you recruit aliens to help you.​
Submitted by BoneVolt (@bone_volt)
Add to collection 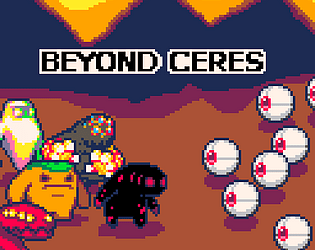 Sinopsis
A mini RPG where you recruit aliens to help you.

Something else?
How to play:
Pressing X will create a grid to see what is in range for battle. Press Z to start a battle.

Every item and enemy in that grid will join the battle.

Once in the battle your objective is to spawn allies in the left side and get them to the right side to destroy the enemy robot. Use the Z key to select and X to cancel/skip your turn.

Select an ally in the 1st row of the menu and then place it in the highlighted area on the left. That ends your turn.

After your opponent's turn you can either place another ally or use a special ability.

Each character has 3 special abilities that cost energy (number on the left). The number of characters you can have at once on the field is limited by the number of collumns in the abilities table.

If one of your characters walks over an item on the field it is added to your inventory. Items can be used without passing your turn.

After the battle ends, any enemy character left on the field (except the robots) can be added to your party, so don't hit them too hard ;D.

Each character can die up to three times (hp bar changes from red to purple to blue). After that they're gone. Be careful with your favorites :)

Character abilities: red element is for area damage, green are some weaker abilities that give you energy in other elements, blue for single target damage and hits enemy robot (if in range), yellow for heal.

Very creative and unique gameplay: This is not only for the combat system, also the way to start the fighting by means of grids. This raises the tactical level of the game a lot, meaning that fighting is something more than attacking with one skill or another.

About the conplexity: I admit that I had to play about three times and read carefully the written guide here to understand a bit how the combat system works. Little by little I was taking the rhyth. Although I am sure that a player not very experienced in tactical RPG could feel frustrated fast.

In my opinion I do not think that the combat system is like the calculation of integrals, I have played games with more complex systems. the game needs a better explanation for to understand it, I think this case is better if the game is explaining step by step, how to fight, what is done here, what is done there, also suport some rookie strategies so that the player has something to start playing with.

For example: in Street Fighther, there is an incredible amount of complex techniques, but the first tutorial explains one or two movements (haduken and jump-kick). this tactic works well with levels AI and the player will feel good to win, then when you want to face more difficult AI you will realize that your tactics can improve much more when learning new techniques.

It is not bad to have a robust system with many options and strategies, it is something that your audience has, "but a great power with a great responsibility". If this is the system that the game really needs and you want to put it on, maybe instead of taking things away to make it simple, it's better to segment it and make the player learn it step by step.

The game has a good concept and has a promising gameplay, it shows that it is an idea worked with details, I hope that some of this will help you for a future version.

Yeah, I think having icons for each ability, and some sort of visual feedback for how close you are of having enough "mana" to use them will help a lot in terms of getting a better understanding of your options.

Teaching some rookie strategies is a great idea! Maybe having some missions that incentivize dominating the field with more units, and others that the optimal strategy is going straight for the "master".

Thanks for the insight!

Very interesting concept. Especially like how you can select which enemy/item is in battle using the grid system, that's brilliant.

However as already pointed out, it's very difficult to get a grip on the combat system. Besides missing feedback, I think the main issue is that first combat is already very complicated. It would be nice that the game starts simple with few enemies/items, and characters with single ability. This way the player can slowly get used to the game system as the game complexity ramp up.

I totally understand you ran out of time on this one. It's quite impressive what you got done.

Thanks! Yeah I was pretty happy when I got the battle initialization idea. It was the last thing I added to the design.

Definetly, simplfying what I can and ramping up the complexity slowly will be my biggest priorities.

It seems good but I couldn't understand what I had to do to fight :(

How far did you get? You start a battle by pressing Z. In the battle you can spawn allies by selecting them using Z and then select the tile to spawn them in the highlighted area on the left. After you spawn allies you can use a spell as long as you have sufficient "mana" on that color. You can also skip your turn using X. Sorry for the lack of a tutorial, I ran out of space on the file. I will try to save more space to include a tutorial.

It looks like there's an interesting tactics game in there but its very hard to figure out without instructions.

I managed to defeat a few enemies by trial and error without knowing exactly what I was doing. The map changed to another area with new monsters and I stopped playing.

I ran out of file space and time so the turorial/story got cut in the begining.

Yeah I should make more clear when your turn begins/ends. Thanks for pointing that out!

The amount of characters that can battle at once is limited by the amount of collumns in the special ability table. I will remove that limit since it is a bit frustrating and not very intuitive.

The screen darkens when you use a character's special ability.

I wanted to make the complexity ramp up slowly with the tutorial, but I think the main problem is the special abilities system... You have to put a character on the field AND have an amout of that specific "mana" but even then most spells are a bit situational... I'll rework the spell system to only require the mana and not the character. I felt that way testing the game late in the submission time but it was too late to change before the deadline.

I will make some changes later, so if anyone is interested you can check back next week

No worries! Totally understandable, time constraints are hard haha. I ended up understanding the game by reading the guide a few times and your comment, and it's a cool idea, but it seems way too complicated for a jam (without an in-game tutorial that is).
At least in my experience, people tend to play jam games once or twice and if they can't understand it they move to the next one. I'm not sure if we should design based on that (at the end of the day you may want to try a complicated idea in a jam), but I think it's worth taking it into consideration.