At the Beginning, There Was NothingView game page

My submission for the 6th Kindred Community Jam.
Submitted by WebHeadGames — 47 minutes, 24 seconds before the deadline
Add to collection 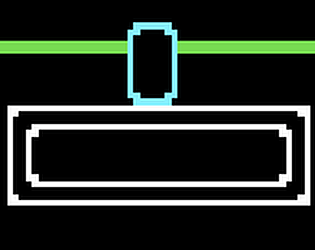 At the Beginning, There Was Nothing's itch.io page

I like a console environment! I think it missing some kind of leading feature, struggled to find out where to go. The dying fx is cool!

Thanks! I tried adding some sort of green line to guide the player, but I can understand how that might be confusing.

Very stylistic arcade like feel to it. Audio was good though some kind more present background music would be a great add on. I found a couple bugs, mostly due to mashing buttons and having multiple screens up (had two blue beans at once one time XD). For just a few days not a bad game. Definitely couldn't find an end either...

I love the style (nice die animation). I haven't seen many people use Makecode Arcade (I had to do some for school but found it a bit fiddly, compared to similar engines like Scratch, but that's just personal preference), but you made a really fun game with it.

The jumping is a bit floaty, maybe add more gravity. It's also a bit annoying that you go back to the menu when you die rather than the start of the level. I also got this bug where I could only move along the bottom and the screen had a white overlay:

With that being said, it's a really fun little arcade game, with a nice story. Good job, and keep making games!

Very cool game! I really like the minimalist art style, the gameplay was really nice too. I think maybe there was some bug because I also didn't find anything but the platforms, I hope you can find the issue but overall this is a really neat game!  Good job!

I didnt find a ending of the plataform. that is normal?

Submitted
Nothing in the Hat
LikeReply
joseluispcrSubmitted1 year ago(+1)

I didnt find a ending of the plataform. that is normal?

Submitted
Nothing in the Hat
LikeReply
WebHeadGamesDeveloper1 year ago

I'm bamboozled. What do you mean?

on the left corner there what no ending of the stage that I could find out. It was just the plataforms that you could touch and those you couldn't.

Perhaps you didn't follow the green line, and wen't down a completely different path. If you didn't, that's odd, and I'll look into it.

Quite minimalist game. The art is nice and the physics of the player is good. I was just loose when i arive at the far east of the map. It's hard to figure out where we need to go. I think it miss objectives.

Nice, what engine did you use?

Thank you! I believe the engine is called Arcade, and I used the Python language in it. Its supposed to be able to make games like they were in the 90s or late 80s.