Who Turned Out The Lights?!View game page

The more you fight, the less you can see! How many zombies can you defeat before they eat your brains?
Submitted by Will Thomas — 3 hours, 40 minutes before the deadline
Add to collection 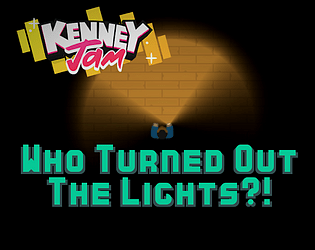 Who Turned Out The Lights?!'s itch.io page

great concept, so fun to play,  a little more polish would have made it perfect

*o* such praise! Thank you very much :) I didn’t get much time for it over the weekend, but looking forward to improving it based on everyone’s feedback :) Thanks for playing!

Fun and straightforward game play! A visual indicator (maybe player flashes?) when you lose life would be a nice bit of polish.  Not sure if it's a bug, however I did notice that movement speed increases when you move diagonally. Depending on how you coded it, you can try normalizing the vector to produce a consistent speed. Great job!

LikeReply
Will ThomasDeveloper2 years ago(+1)

*facepalm* Yep, of course movement would be faster diagonally. I see what I did, just adding on to the position when I test for which keys were pressed. I’ll probably change it to an acceleration/velocity movement system instead later (which will make it easier to normalise), and have the camera lag behind the player a bit for extra feel.

And yeah, I thought about some visual feedback for attacks on both sides but didn’t get time for it; I’d probably add some bloody particles splattered everywhere! Everyone loves particles ;D Thanks for the feedback!

Absolutely! I look forward to playing again with your updates :)

Interesting idea! I included it in my compilation video series of all of the games from the Kenney Jam, if you’d like to take a look. :)

Hey! That’s a nice game. I like an idea of dimming out flashlight. Controls are smooth and visuals are nice. Here are some things I want to outline.

To sum up, this is solid entry. Gameplay is fun to some point, visuals are nice and “cursed” theme is ok. It lacks some balance and polish, but that’s good game made in 12 hours. I enjoyed playing it.

EDIT: If it feels harsh a bit, I’m sorry. That’s not my intention to hurt feelings. I just want to share my point of view how I feel this game and what I could improve in game. Oh, and HTML5 build is always the best way to play it. That’s big advantage to have game playable from browser.

Hey! Thanks for writing such an extensive comment. As you saw I had less than 12 hours to work on it, so things like balance were lower priority than having it working well, sadly. The flashlight didn’t even dim (the whole point of the game) until the very end, haha!

It is a bit slow; I did try to make things a bit faster, but the player quickly became so fast it was unwieldy and the zombos so fast it was unfair to the player, but I’ll try and fine tune it at a later date to make it harder >:)

Yes, the spawn rate of the zombos was capped so that they weren’t being spawned too frequently, but again it probably could have gotten a bit more frequent. If I had more time for playtesting it for longer, I may have found it got quite easy and tuned it down.

Being able to see the zombies in a short range behind the player was supposed to be so that the player is never taking damage that they don’t know where it’s coming from (which I now realise sort of goes against the point); I could tone down the range of that visibility to make it more difficult and surprising, maybe so it only shows them when they actually hit you.

You get points over time and when you hit zombos; I can’t reproduce getting kill points just by hitting.

I was thinking about zombies having multiple hit points and bouncing them back when they get hit, but didn’t get time to get that working. I could have just changed their lives to a higher number, but there would need to be feedback so the player knew they had actually hurt it. And I agree the map is boring, another person suggested adding obstacles.

Sorry about the sounds; I could make them quieter as time goes on… then it would be even more spooky when you don’t know they’re being spawned!

All in all, I think I’ll have to do another release after the rating period! I will make this game great!

Totally. If I had more time (only got about 12 hours I think to work on it) I would like to have added more. But the enemies felt more difficult on my trackpad than they probably are with a mouse, haha! Thanks for playing :)

Nice game, the flashlite idea was cool. A lot of people with the cursed theme has moved into killing zombies, i wanted to see the idea further. An attack animation, faster waves or closer range, items, or different skills on the monsters will grow up the vote points to max.

LikeReply
Will ThomasDeveloper2 years ago

The zombies do gradually spawn faster over time until they spawn about twice per second or so, but there’s definitely more could have been done with more time (like you say, an attack animation was something I would have liked, but it went in the “if I have time” list). Thanks for playing! :D

Nice work! I like the visuals in this game as well as the gameplay itself. The only thing I would change is the attack range to kill the zombies (I feel it's too big). Other than that amazing game!

Thanks for such praise! ^_^

The attack range is probably a bit high; I didn’t get much time to properly tune the balance unfortunately, maybe I’ll release an improved version after the jam voting period is over.

Very cool flashlight effect, did you build it just for this jam? Can't go wrong with zombies

Unity has a 2D Point Light which basically handles everything for me; I just turn down the intensity of the light when the player attacks, and turn it up slowly over time. I wanted to change the range as well but that wasn’t accessible from a script, I think that value might be baked in at run time (it is still an ‘experimental’ 2D lighting package). I also wanted shadows casted by the zombos, but didn’t get around to it. All the more to add to a “Remastered” edition! Thanks for playing!

I love the flashlight aesthetic in this, it really sets the mood of the game. I ended up getting around 50,000 before I stopped. At the end I was just spinning in a circle clicking all around me and no zombies could get to me. Nice job!

Some things I was thinking would be cool while I was playing: having furniture or something be obstacles so you could make the zombies (or yourself) get caught behind them. The zombies and character also moved pretty slow for me, so idk if that's a webgl thing or what. Also, I think having a "stamina" or something for the flashlight so you can't swing it while it's off would be a good mechanic.

Thanks for sharing, I enjoyed it!

Ooh, obstacles would have been a great addition! Could have made the room much more interesting to walk around in.

The speed was a bit weird, I must have had a bug somewhere that made it sometimes quite fast while I was trying it in the Unity editor so I tried to slow it down a bit, but once it was published to the WebGL it does feel slower. I was sure I tied it to the frame time so it should have been the same, but nevermind! I’ll be sure to get it right next time :)

Good idea about stamina. I think I only half-implemented the attack mechanic, then thought I’d finished it! That’s what you get when you rush a game in 12 hours.

Glad you enjoyed it! Thanks for taking the time to try it and leave such a good comment o

Hey really nice job on this! Super spooky vibe. It would have been  really cool to see some other enemy types - perhaps some that try and stay out of the light and sneak up on you? Shooting didn't always seem super responsive to me - perhaps that's my trackpad, or is there limits on ammo? Great job!

Smarter zombos would have been nice. I didn’t spend as much time on the attacking as I probably should have (I was rushing a bit to get it done in about 12 hours total). In my mind it was swinging the flashlight rather than shooting (swinging with a 2.5 meter arm - you know, video game logic) but I also found it didn’t always do it on my trackpad, then other times I could spam it with a lot of clicks and run the flashlight down to darkness quickly. So it could be trackpad thing, or it could be a didn’t-give-enough-time-for-proper-testing-and-fixing thing, not sure.