What are people doing?

I am making a tiny roguelike clone of Berzerk for the 2600. I will write my entry in Chicken Scheme using SDL and OpenGL. As I have never used Scheme before, this will be 100% new code, and I need to keep it simple. I'm going to reuse a few sound effects from an old 2008 CL version of this idea, and the following PNG tiles:

I am working on a vertical scrolling bullet hell shoot-em-up game called MetaX. The MetaX is a special space ship made from reclaimed materials that can reclaim, or consume, enemy ships for bonus points and more power. I guess it's sort-of like bullet hell meets Kirby. I'm going to attempt to make about 5 minutes of gameplay: A single stage with a mid-boss and final boss.

Tech-wise, I'm using Guile Scheme and my own game framework called Sly that sits on top of an SDL2/OpenGL base. So far I made a title screen and am working out some rendering issues with my sprite batch implementation. I've never written a complete game with Sly yet, so this should reveal what really needs improving in the future.

I am creating a local multiplayer platformer game, where the players scramble to collect coins and gems that randomly appear throughout the level. It is inspired by the old Super Mario Bros Battle Mode, but with more emphasis on moving fast to collect lots of treasure, not trying to make the other player die. If I have enough time, players will be able to bump into each other, throw items, and trigger trap walls and platforms to try to slow down the other players. If I don't have time for all that, it will simply be a race to see which player can navigate the level fastest. I am going to try to make 2 or 3 levels, and have a simple text-based level format so other people can create their own custom levels.

Here is a mockup I made with the sprites I am using (from Kenney Game Assets), just to give a taste of what it will be like:

As I mentioned in the Introductions thread, I am using CHICKEN Scheme and the SDL2 bindings that I have been developing. Also, I am writing about the jam on my blog, one or two posts per day as I make progress.

My game is a roguelike in Clojurescript (rot.js) about Nicolas Cage. I have a grand vision for a game which covers his entire filmography, but for the jam I'm trying to make a proof-of-concept based around the events of Raising Arizona. I know I want major scenes to be levels, but I don't have specific ideas for gameplay yet. My goal is for the game to be "thematic", in that the style of each level and the way to pass each one depends on the film and context.

I'm going to try doing a "distilled" 4X game with abstract graphics where each turn you choose if you're exploring (opening a tile), expanding (taking a tile and any resource sources it might contain), exploiting (improving tiles, or making use of those resources, where I'd make it very simple; an economic resource and a military resource, a generic improvement - like, monopoly does alright with houses and hotels for example - and exterminating, where you'd use your army created with military resources to conquer enemy tiles, eventually taking hold of all "capital" tiles and winning the game. I'll try using my Sketch Common Lisp library, which is still very rough. Hopefully, doing a game using it will help me develop it further in the right direction.

We're making a fantasy hero league (we know it's too ambitious!) — using Clojurescript and Reagent. 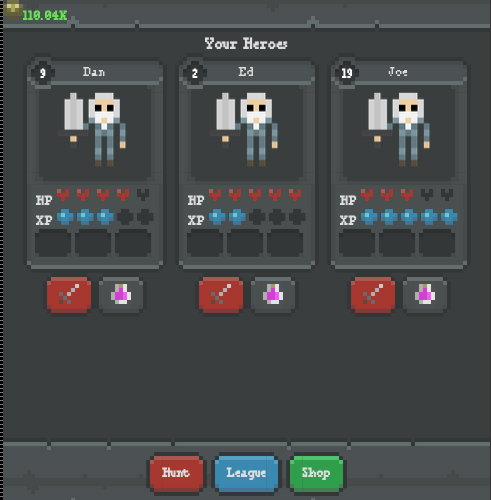 I've been working on the art and building the interfaces whilst Joe's been writing the code for auto-resolving the encounters, based on the levels and items in your party. 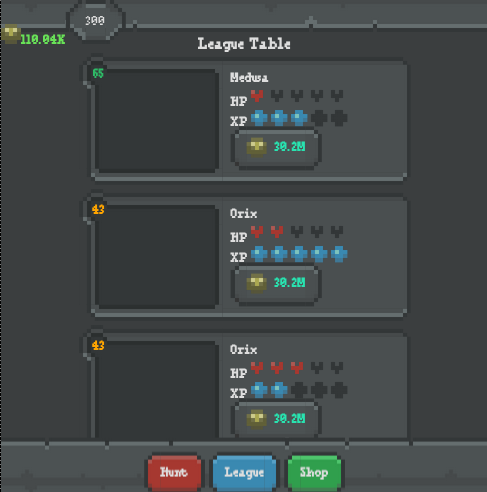 Although they're still rough, the interfaces are nearly ready. They're all built from Reagent components, but they're not rendering data from the game state yet. 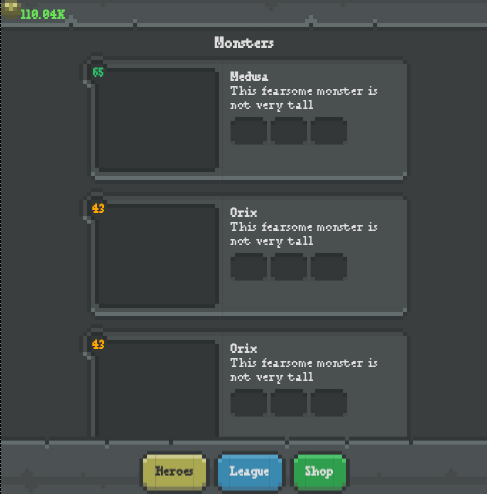 Hopefully tomorrow we can start hacking on tying the interfaces into the game logic properly. As soon as that's done we'll start on the procedural stuff for generating the heroes and monsters.

Awesome to see what people are doing!

I'm working on crypts and corpses here https://gitlab.com/mordocai/crypts-and-corpses. The idea is to be a roguelike where you play a necromancer. I attend to work on this more post jam one way or another, but hope to get basic gameplay with minion summoning in before the end of it. Not going to be pretty screenshots to show off really due to the text based nature, but I might be able to put some gameplay gifs together when it is further along.