A short interactive fiction story about two teenage boys and a historic rocket launch.
Submitted by Jayden (@JaydenPerry_) — 3 hours, 57 minutes before the deadline
Add to collection 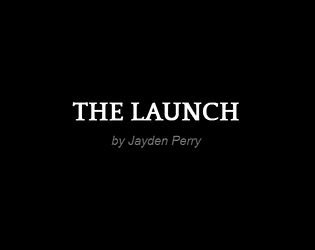 This one was really well-written and resonated with me. Congratulations on your first game! It's a good one.

The "I'm gonna get out of this town" thing and the freewheeling boyhood stuff very much connected to my youth. Really good job, this is one of my favorites of the jam in terms of the writing.

Really appreciate the feedback! Thank you, looking forward to improving and making some more stuff soon given the fun I had making this :)

I thought it was really quite cute, Charles and Dale teased each other in a way that made me smile. And of course, I have to be excited by a rocket launch! Nice work on your first game 👍

Thanks very much! Glad you enjoyed it, it was fun to learn by putting the pieces together.

This is a great effort for a first game! I sort of feel as though a lot of the options - especially the early ones - essentially boil down to a choice between two different ways of saying/doing the same thing, but given that you're playing a specific character with (presumably) a particular way of saying/doing things, that seems reasonable enough.

"Imagine not only being able to leave this town but doing it in the loudest, most expensive way possible?"  💯

Aw, that warmed my heart. Really brought me back to being a kind.

Submitted
A Crimp in Time
LikeReply
JaydenDeveloper2 years ago

Amazing, I'm really glad you liked it! Thanks :D

Simple, short and efficient, I loved it.

Thank you so much! Very glad to hear it was enjoyed :)

I enjoyed this, a well written slice of feel good fiction!

Thanks so much! Really appreciate it and glad you enjoyed it :)