Submitted by lolfrad (@lolfrad) — 6 hours, 51 minutes before the deadline
Add to collection 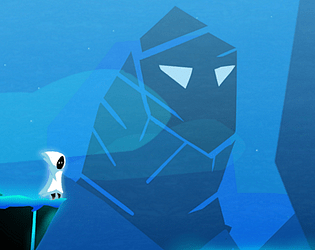 XenoneoSubmitted3 years ago(+1)
I wish jumping out of yellow dots were in player's hands instead of being auto, but maybe this is what you wanted to be.
Submitted
2 Worlds Onside
LikeReply
lolfradDeveloper3 years ago(+1)

You're right I should have given the player control over jumping when using the orange orbs.

And thank you for making that video, it's really insightful. It really helped me see the infuriating parts of the game, that I just somehow ignored until now.

I very much appreciate you taking the time to record your playthrough.

I played with the controller and have  problems to control my ghost.
It looks, that it is more playable with  key and mouse.
Thanks for your gameplay video.

I had serious problems with controls. Xbox controller is not mapped correctly (the movement was working fine, but not the other keys), so I've played it using the keyboard.
To be honest, I've found the controls pretty bad, initially. Then, after a bit of practice, I learned how to use them. The main problem was that "W" is for jump, and space is the teleport.
After a while, I discovered that the left-click could be used for teleport as well.

I know it's written in the game page, but many player (like me) downloads the game from this page directly.
As a suggestion, I would map "space" as an alias for "up". Furthermore, I would add some kind of in-game tutorial :P
I've appreciated the good difficulty curve and the level design in general. The jumps are well calibrated, even if I died a few times before discovering the double-jump. LOL. TUTORIAL!
Maybe for the contest version, I would add a few more checkpoints, since sometimes it feels a bit frustrating because some colliders were not 100% polished.
Summarizing, I think that this game has good qualities, and could be MUCH better with an initial tutorial explaining the controls AND the double jump as well.

The gameplay choices are interesting. The killer feature is, of course, the teleport, that gives the player a LOT of air control. For instance, it can be used to pass through objects AND to stop the time while deciding what to do.
This is a great approach, because it turns a frustrating game mechanics, like the "jump of faith", into an original and challenging gameplay sequence.
Definitely, I think this is a good entry for this contest. I'd sure try an extended version.
Good luck!

Neat, solid warp mechanic that feels easy to use and control. The level design was good for the most part, allowing you to figure out things as you went along without holding your hand, although I wish the game told you in some way how to use the warp ability when you first got it.

As I said before, the warp mechanic was great to control. The main character, not as much, particularly because of how little aerial momentum they have. It made certain parts of the game more frustrating than they needed to be

The level was a blast to play, until the final few sections. The difficulty ramped up and it quickly became one of those platformer sections where you needed to fail countless times to the point of memorizing what you needed to exactly do to get through it. I got stuck in the final section for about 15 minutes, but I kept going, so I suppose that speaks for the game's ability to keep you trying more. I would have preferred to have those few sections be broken up into more checkpoints or to be slightly more lenient however

Solid. If you wanted to produce a mysterious atmosphere with a sense of wonder, you totally succeeded. It also looks really pretty and impressive, with no hit to performance. Music and sound effects complemented the aesthetic quite well. I didn't quite get what anything meant in terms of narrative, but I don't think that can count as a negative for this game, specially since it is a prototype.

The main mechanic has that "fun factor" that keeps you wanting to use it to challenge the perils ahead, and checkpoints are placed in such a way that failure is a learning experience rather than an exercise in frustration.... until the last few sections. I was almost ready to give up. I think players that are not super fond or skilled at platformers would give up pretty easily at these points, so I cannot say this can retain all kinds of players

I see lots of it. This can easily become a full fledged game using only the warp mechanics and a couple more objects for the main character to interact with. With an expanded narrative that keeps showing the player more of the game's world added on top, this could seriously become a good commercial indie game, albeit on the short side

Thank you so much for taking the time to do this! Honestly made my day :D

Clearly I should have had someone play test the game hahah, the levels really seemed far too easy for me after testing it a bunch, so I must have gone overboard on the difficulty on the final few sections.

I'm very curious about what you mentioned here: "As I said before, the warp mechanic was great to control. The main character, not as much, particularly because of how little aerial momentum they have. It made certain parts of the game more frustrating than they needed to be". Could you elaborate on this? Any thoughts on how this could be improved?

Again, thank you very much for the feedback, I really appreciate it :)

With that comment I meant that the main character moved really slow in the air when not warping. It felt a little too slow for me, so for some sections where you needed just a little more to reach the next platform I ended up dying. This might be more of a personal preference thing however

I see, thank you.

I'll try tweaking the movement speed in the air a bit to make it feel better.

Awesome. If you haven't already, could you also check my submission? I would really appreciate it!

I wish you had some indication what the warp ability did when you got it. Fun to play. Hope you have plans to add more levels. I assume it stops at the crystal or is there something I missed.

You are right, I do need to work on how mechanics in the game are introduced to make sure they're more understandable.

I'm not sure what crystal you mean, but you might have missed a part... the game ends with a fade to "thank you for playing" and then closes.

Why is the warp ability indicated by a circle if the area is a square?

The area is supposed to be a circle, this is a bug on the keyboard + mouse controls.

Played it with mouse and keyboard, fun platformer with a nice aesthetic

Its looks very good but I was not able to open it. Sorry.