A puzzle game about the first day of an astral.
Submitted by kato-san (@katoconbufanda) — 23 hours, 35 minutes before the deadline
Add to collection 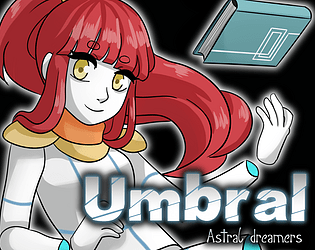 Ranked from 286 ratings. Score is adjusted from raw score by the median number of ratings per game in the jam.

Having problems with the puzzles? Check the solutions here:
https://itch.io/t/356064/detailed-playthroughs-of-umbral-astral-dreamers

I could download and extract it but the winrar file can't be deleted or moved.

This was pretty neat and a little short. For the puzzle I though the wall would throw the ball on the other side by shooting, but it was for blocking.

I think it's because the wall looks like it's going to push the ball, so maybe a little shadow will help it to seem that it's actually jumps out.

Thanks for playing! And well, I think the instruccions was clear.  The robot tells you what to do step by step. He never says that the wall will push the ball, it tells you where to put it (In the red rectangle) and that you have to press z repeatedly behind it.

Umbral was in the initial batch of games I was assigned and was in my top 5! Here are the original notes I wrote from when I first played it:

- Best title screen/music so far. Immediately makes a good first impression.
- Love the sci-fi aesthetic and the scenario of the game.
- The time stopping puzzles are decent but I found the momentum building puzzle frustrating. There is no good visual feedback on how far the ball is going to move. It took me a few tries of mashing on the ball to get it to hit the target.
- I was surprised when the puzzle ball did damage and that it could actually kill you and send you back to the title screen. It's easy to keep walking into the puzzle ball and take a lot of dmg before you even register what's happening. If you do lose your energy, it should restart the room rather than game over.
- The boss fight using the balls was a bit clunky. There wasn't much threat once you figured out the gimmick and was a bit tedious to complete.
- It's not obvious you can walk through the lasers without consequence in that hallway you fall into. I ended up walking over a damage tile to avoid them.
- I believe it's possible to cause a progression block if you were stupid with your orbs/energy. There should be some way to renew a minimum amount.
- Nice ending point. I'm interested to see how this demo will be expanded upon.

Thanks for the feedback! I really appreciate it!

my favorite charactes were the principal female and the one with one arm because of their designs :)

worth it try it !

amazing game loved every bit of it

The game is quite nice looking, and the character designs are really cute. I liked the general idea a lot and the puzzles were interesting and seemed to work well, though some of them could be explained a lot better. Sadly, I got a bug that caused a game over, so I only got part-way in, but I'll likely play more of the game later.

Thanks for playing! That was not a bug, only that you can not touch the ball when it's red because it hurts you. You had very little life and It kill you.That puzzle gives problems to some people, help you with this guide to pass it. the others are easier.
https://itch.io/t/356064/detailed-playthroughs-of-umbral-astral-dreamers
I hope you give it another shot, you don't start the game yet.

Having problems with the puzzles? Check the solutions here: https://itch.io/t/356064/detailed-playthroughs-of-umbral-astral-dreamers

The art, music and general atmosphere are good. The types of puzzles are pretty good for the story so far. The actual puzzles not so much.

Firstly, that's not how momentum works. Your hints didn't help much either. Putting the ball on the red space doesn't have any meaning with understanding why the red space matters. The mention of lowering a "platform" doesn't make sense either, given that the visuals don't show a platform. They show a wall. Going just by what happens when time is frozen, the ball appears to lose all its momentum the moment it stops being pushed, and you gave no explanation of how the time mechanics work in setting, so there's no reason to expect that shoving the ball at a wall will somehow allow it to store momentum. I could understand if it were a matter of the force that prevents the ball from going through walls was stopped by time, but even then, that'd raise the question of both why the ball doesn't go through the wall while time is stopped and why the ball doesn't go in the opposite direction when time resumes.

In addition, the balls still deal damage to the player character even when stopped, and then don't stop quickly when time is stopped.

Moving on, the laser explanation is complete nonsense. The speed an actual laser goes at will always be the speed of light in whatever atmosphere it's passing through, and whether it's visible comes down to whether the atmospheric gases cause sufficient dispersion. This wouldn't be a problem, given that fictional lasers are generally nonsense, but your lasers don't work in a consistent manner. Why do the first lasers hurt to pass through while the later lasers are simply impassible? On top of that, they're presented right after the player character was just advised to avoid using time stop, thus leaving it up to the player to either just guess whether the invisible lasers will hurt or worse guess whether the invisible lasers will hurt worse then using energy mode (in the case that they used the orb to read the wall), followed immediately by having to guess whether time stop will affect the next set of lasers.

The other puzzles were less plagued with issues, but the color tile sequence doesn't make much sense in context. It's also not a good idea to make puzzles or mini-games that rely only on the player's ability to see color. That's not testing any mental capability. It's just excluding people who have the matching color deficiency. Separately, it's also not good to ask the player to find a password while their inventory contains an item that is just a password with no description.

yeah, I already know the game need more tutorials. My beta tasters didn't find any difficulty. The lasers are impassable when you can see them. And the color tile sequence is in the page with words in colors. Thanks for playing and the review.

Out of all the entries I've played, this one feels the most complete!
I took a little while to figure out a couple of the puzzles, but when I did,
they delivered the "a-ha!" feeling we all crave from videogames.

I wasn't paying that much attention so forgive me if this is actually a non-issue,
but I think energy should be a renewable resource. That is, it fills up a little over time.
Maybe one point every 10 seconds or something. That way, all situations are winnable
if players miscalculate. It'll also serve to punish enough of the player's time
to encourage them to be careful. Still, the ability to replace orbs with health
in the first place is quite considerate, so thanks for that!

Thank you very much for playing the game! I hope you enjoying it and I'm glad you didn't give up with the puzzles.  it's a good idea what you have, I'll write it down. When I can update the game (at the end of the contest) I will implement all the good ideas everybody have given me.