Puzzle Platformer with Reverable Tiles
Submitted by SquiggelSquirrel — 1 hour, 29 minutes before the deadline
Add to collection 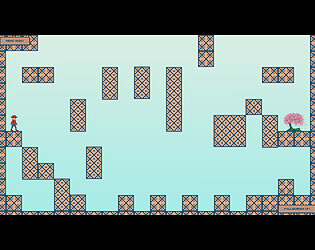 How does your game tie into the theme?
Panels can be flipped (which is kinda inversion?) and colours invert.

Source
I'm willing to on request, not sure how this is normally done (Github?)

Participation Level across all Jams
Second

Very artistic game! I like that game mechanic... its puzzle combined with jump and run. You need to master the jumps or might fall down... you need to find the right path... or get smashed or fall down. The levels that I could play (due to time limits) were reasonable hard and in slowly increasing difficulty. I would have liked a more diverse soundtrack - it kind of gets annoying over time. But it still fits the Zen or Japanese style of the game. The tree and so on... How many levels are there?

There are six levels total.

Thank you. Then I'll just play it again and see how it ends... I nearly got there thought.

So beautiful! I really love the experience. What a neat game. I personally used the touch controls and I found them super intuitive and relaxing. Well done, great submission.

Very pleasent and meditative :)
I like the design and especially the tree including the leaf animation using particles, well done!

The inversion mechanism was quite challenging but a pleasant variation to classic platformers.

This is my favorite concept in this jam : very well made! I'm curious how you did the falling petals effect? Is that a huge particle emitter with very low gravity?

Yep, it's one big particle emitter. No gravity but a small starting velocity, a small sprite texture scaled up x2, a random angle and slightly random direction, one-shot with some explosiveness.

It does mean that I don't switch the entire scene on changing levels, just the "level" node gets swapped out, but the particle emitter node is outside that so it hangs around.

There's also a couple of particle emitters on the tree, and one that triggers when the player gets squished. Same sprite, just played around with the settings.

I agree on the level complete effect being nice!

The text is realsmall on my phone though, but seems to otherwise work fine.

Submitted
Reflections: In a Strange Place
LikeReply
SquiggelSquirrelDeveloper1 year ago

Thanks. And yeah, in future I need to remember if I'm making it mobile compatible it's probably a good idea to design for mobile first. Text and button size make a difference.

Solid puzzle game! I really liked the effect when you completed a level.