Help a gang of chickens defend their means of production.
Submitted by Véel, lapspider45 (@lapspider45) — 1 hour, 3 minutes before the deadline
Add to collection 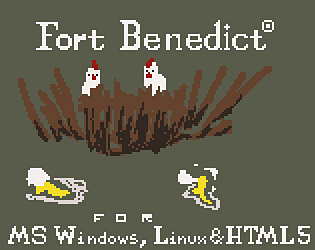 Game Description
The chickens have taken control of the farm! They no longer have to share their eggs with anyone else. But there are some who desire their eggs, who might try to take them by force. Luckily they are prepared for this.

Can't say i've ever played an eggy tower defense game before. This was so fun! Agree with the other commenters on adding more chickens - perhaps in an update? Great job on the game design and audio  :) Congrats on the submission!

Thank you so much for your review! Make sure to follow the project to be warned if we decide to update it :)

I'm impressed by this game! It looks simple but it includes build your own path for tower defense and balance between build your house and destroy enemies. I think with some polish and more types of chickens(haha) this can be a real game! And I'd definitely want to try it if it is published anywhere!

Wow, those are some really inspiring words! Thank you so much for your review!

Really neat idea! I love having build my own defense route. At first I didn't get the point, and I just built a big fence right at the end, but then I realized that I just didn't have enough fire power to deal with everything, which is when I started to build more complex path. I built a route that would go down, then up, then to the right, then to left, both to keep them away from the end for a while, but also so I could place chickens at strategic positions to cover multiple paths.

I also liked having to balance between keeping chickens in the pen to make eggs, but also keeping chickens on the defense to stay alive. Like the other comments said, it would have been nice to have a way to get more chickens though.

I didn't beat the game, but it was still very fun!

Thank you so much for your review! I'm so glad you enjoyed the mechanics, we really tried to balance the production and defence aspect of things, so it makes me happy you thought it made the game fun!

Really fun tower defense game chicken themed! I agree with tiwa that it would be nice if we can get more chicken. But what is there is very enjoyable as is and I can see myself have another go at it.

I thought the audio was well used, graphic isn't fancy but charming nonetheless and draws me in just fine.  I have no problem with the controls. Good game!

Submitted
Carol of the Penguins
LikeReply
VéelDeveloper272 days ago

Thank you so much for your review! I'm glad you enjoyed your experience :)

Nice idea. You should add the ability to raise more chickens.

I agree, one of the plans for the game was to have the ability to raise more chickens, but that was one of the many ideas that ended up not being made due to the jam setting.

Thank you so much nonetheless for highlighting that one!

Thanks a lot!
Indeed, it was solidly inspired by classics such as Bloons, some Element TD-style crafting was hopefully going to be in there but was dropped last minute due to time constraints, and it was a pretty obvious tribute to the Line TDs from war3.
I'm glad you enjoyed it!