Submitted by dkomnen — 54 minutes, 55 seconds before the deadline
Add to collection 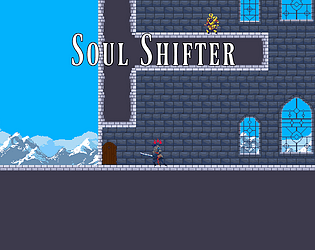 Game Description
I was inspired to make a game that would have a living/dead world change mechanic like soul reaver. For some reason I also decided to do it like a metroidvania. This was a poor decision on my part as the game was a bit too technically advanced for me to make. I'm pretty pleased how it turned out visually though, as it's my first time doing a tileset. The boss fight is pretty wonky.

Participation Level (GWJ only)
It's my first time in GWJ.

Participation Level across all Jams
~5

Lovely character, i felt a soul reaver vibe, combat is hard af, even using the dash, anyways i like where you are going with it, i tough on a "soul shift" idea for a moment, instead went to the perspective shift.

The tilesets and animation in this game were very well made, I did however have one small grudge with your art style. I found the blue shadow effect that followed the character a bit distracting to look at. I think this is because the saturation on the colour is very high, if you lowered the saturation a bit I think it would be easier to look at.

I actually had a lot of fun with this and played it for a while despite the difficulty. I feel the combat was enjoyable and has potential, but at the same time could be frustrating and needs a bit of work to feel fair. I would keep the lethality but perhaps more/clearer telegraphing of enemy moves and/or more leeway in timing the dash to dodge attacks. Maybe also sound effects to signal the enemy is about to attack.

Your game actually benefited a lot from not having a HUD in terms of immersion, and I appreciated the contextual hints to teach you how to play - they worked really well. But I did miss indicators of the enemy health (especially the boss), and I wonder how you might better show that whilst still keeping this HUDless - damaged/bleeding sprites, or some other visual indicator?

I really enjoy this kind of twitchy gameplay and find it really addictive, so I wouldn't lose that, just make some tweaks. There was also a little repetitiveness in terms of the enemies you face, and I found myself skipping some of them by shifting between worlds or just dashing/jumping past them. The visuals are really really nice and I'm jealous of your living/dead animation as well as the "shadow" behind the player character. How did you do them?

Thanks for playing! I'm glad you enjoyed the game. I appreciate your feedback and it gives me some clear actionable steps on what I can improve in the future.

As far as the visuals, the "shadow" effect is done with a timer that creates a new frozen AnimatedSprite copy of the players and changes it's colour. This "ghost" node then reduces it's transparency over time and finally deletes itself after a couple of seconds. I tried some different approaches like using the particle effect system for this, and while you can create a ghost trail, it doesn't work with AnimatedSprites.

The living/dead animation is the players death animation played forward, then in reverse. I split all my nodes in the world into "corporeal" and "spirit". On world change I notify one group to add transparency and the other to reduce it. I also do a color change. Someone told me it could be improved further with sprite masks, allowing you to have alternate versions of tilesets for the spirit world etc. It seems like a good option to explore.

Seems like a bit too ambitious scoping and didn't quite get to finish and polish enough. 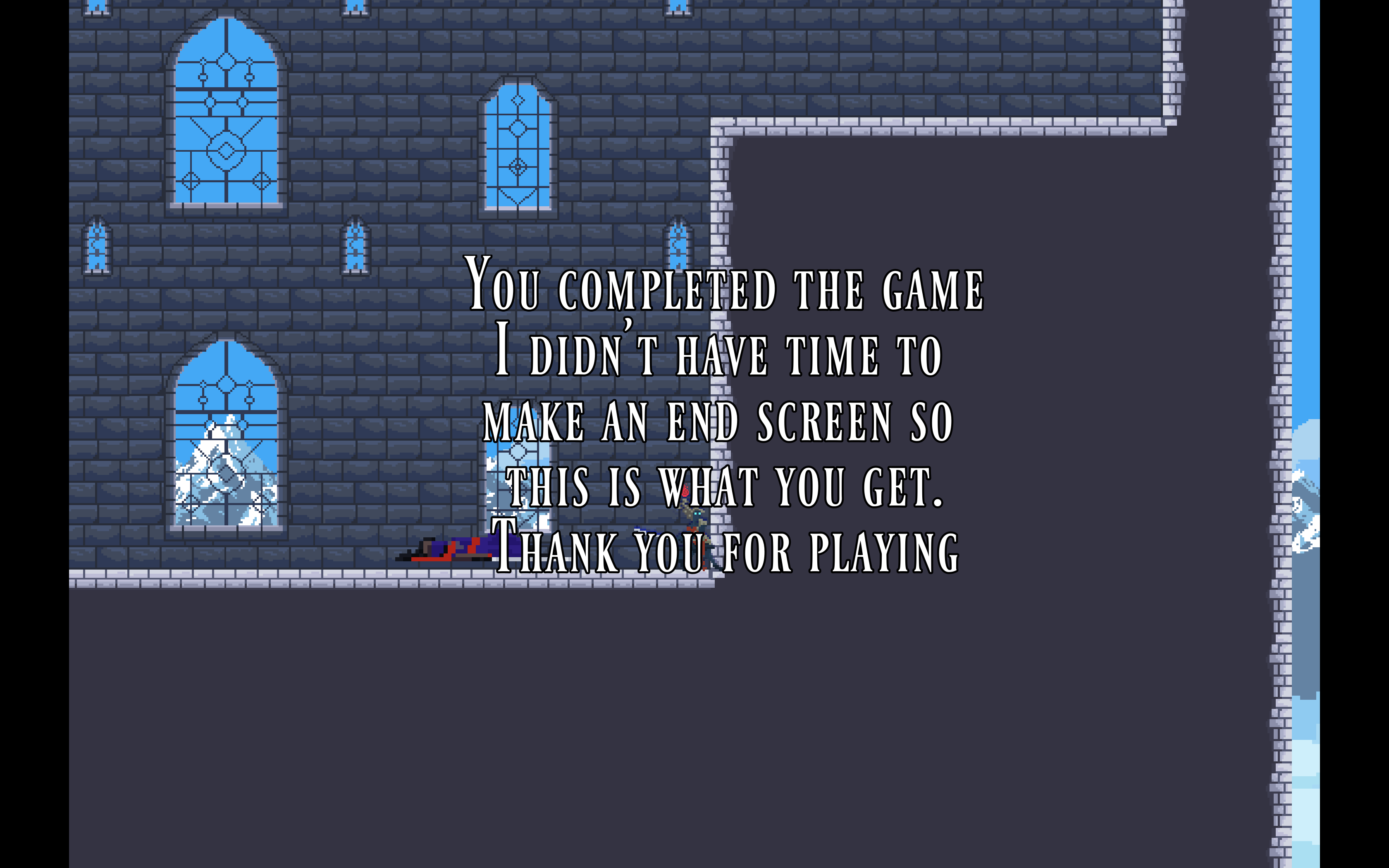 The "main mechanic" wasn't really used at all. And now after reading the description, it's not too metroidvania either... 😅

The art was the best part. Nice looking pixel art with some good animations. There was some weird flickering lines in the middle of the screen at times (sprite tearing maybe). Not really a deal breaker but annoying looking nonetheless. The audio side was quite bland. The sound effects really lacked some punch and the music didn't fit too well either.

The controls weren't too great. Everything was just too clunky. The jumping was super awkward, the initial horizontal momentum was way too much and you didn't have enough control afterwards. So almost like that completely locked jump of NES Castlevanias but without the game designed around that.

Didn't really get the combat before I really had to on the final boss. I got kinda frustrated on that long stretch of enemies because I couldn't really fight an enemy reliably without getting hit. So I just ran past everything. But yeah, obviously I had to learn the combat on the boss and then it did click with me. After beating the boss I did a quick second run killing everything and reached the boss without a single death. 😎

The second swing of the attack was completely pointless. You pretty much always had to dash cancel out of it or you'd get hit. The enemy telegraphs were not enough for my old man reflexes at least. I couldn't really rely on them so I had to just swing, dash cancel past the enemy and repeat until victorious. And the same tactic on the boss too. The boss was also a bit too relentless in my opinion, some downtime on the attacks would make it more organic. And obviously some different attacks would help too but seems like you were struggling with the scope even now.

Happened to me several times that I dash cancelled at a wrong time (I think at least that it is timing related, didn't seem to happen if dashing right after the first swing connected) and was completely locked out of attacking for a huge delay. Like over ten seconds. 😡

Anyways, good job on making something completely playable even though it seems like it's not quite what you were aiming for originally. Scoping correctly is always difficult but gets easier with more experience and knowing what you're capable of. 👍

Thanks for playing the game. I really appreciate the detailed feedback, I feel like people usually avoid being too direct on game jams so sometimes you don't get the critique you need.
I didn't experience the issue you had with jumping. I thought in that way the controls were fine. Not sure how I could fix them in that case either. Maybe reducing the jump impulse(how much force is applied initially), but also reducing the downward gravity acceleration a bit?

For everything else I completely agree with you, most of them were issues I was aware to some degree during the work. I think it boils down to what you said, it was overscoped.  I need more experience working with some core mechanics for these types of games before I could execute it properly in such a time frame.

Yeah, I do like to write brutally honest feedback, the kind I would like to receive myself too. Of course it might make it seem like being overly critiquing since it's more helpful really to point out what could be improved instead of gushing on about what was done well. It's all about improving as a dev in my opinion...

Yeah the jump wasn't a huge issue by any means since there wasn't any precision requiring platforming sections really. It was the most noticeable when trying to jump up those platforms. You pretty much had to go to a standstill right under them and jump up. Even a slight horizontal movement would mean the jump didn't reach high enough.

And fixing it of course is a mixed bag, it all comes down to just fiddling with the numbers until it "feels" right. The most classic platformer jump is the one where you just apply the impulse upwards and let the player still have 100% control of the horizontal movement. And definitely do not decrease the gravity, that would just make the jump feel floaty. The mario formula is almost doubling the gravity after the jump has reached its peak. Sure, it's far from realistic but it's what the gamers have gotten used to. 😅And another thing that would give the player more control is the de facto "hold jump" to jump higher thing for controlling the .

It's obvious you put a lot of work into it.

I loved it. The character design/animations reminded me of Dead Cells at times. For a jam game really good...invisible walls are also totally accebtable ;)

I struggled a bit defeating the boss, but a discovered that he can't move past a certain point at the checkpoint where you can hit him, but he can't reach you.

Replayed the game, just so I could beat the boss  with your cheese :)

Great job! The game looks really good, especially for a jam. I also wanted to do this kind of world shifting mechanic but this was my first game and I just didn't have time to finish it but I got a good starting point. Check out sprite masks, you might be able to use it to have alternate tilesets for your spirit state. My biggest critique I think is too just shorten the attack animation because it was pretty hard to attack and not be attacked so I just avoided all enemies, and couldn't beat the boss. Great job though!

Thanks for playing! I'll have to check out sprite masks for sure, I had an idea of the spirit world having destroyed/damaged walls and windows but I wasn't sure how to implement it best.

The enemies are relentless, I agree. At one point I was thinking of giving the player infinite life just so people could play through. I really messed up my enemy state machines honestly, it was so much spaghetti that I just couldn't fix anything :D

Beautiful game! Really nice job on the graphic and music.Unfortunately I am terrible at platformers and can not remember all the keys I need to press in moments of panic to save my life, so I only made as far as the roof.  Still,  I can tell there are some very quality work being done here. Switch between the two realms is neat and the fact you may use that to evade enemies from different realms is very interesting.

Thank you for playing! Honestly the game is a bit wonky with the enemies attacks and level design as I did them both during crunch time so they suffered the most. Glad you like the graphics :)