Top down shooter where you have to kill evil interlopers and save the multiverse!
Submitted by AniMerrill Productions (@animerrill) — 1 hour, 4 minutes before the deadline
Add to collection 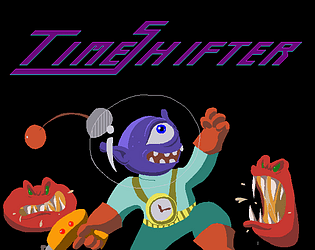 This is a pretty cute action game, although I started to find it repetitive by the time I got to level 5.  Everything was very polished, and the art and sound worked together with the game quite well!

Thank you so much! And yeah, by the time you get to level 5 and beyond, you really run out of things to do. If I had it my way I would have probably added more enemy types or something that starts to spice it up around then, I just ended up not having the time for it.

I certainly understand how that can be! ;)

Why is it when i download the game(win64 and 32), the folder is empty.

I'm actually not sure. A couple other people played it on Windows, and when I do a test download they seem to have the .exe and .pck in there. How are you downloading it? From the itch.io app? Or just from the browser?

Yeah I'm not sure what the problem is, when I download it I get a .zip file called "timeshifter-win64.zip" (or -win32.zip for the 32 bit version) and it should contain a folder called "timeshifter" with "Timeshifter.exe" and "Timeshifter.pck" included inside it. I tested this a few ways. Are you sure you're unzipping the file correctly? I've definitely seen at least three people successfully play this on Windows now, and I haven't modified the upload since the official submission day. I don't know why the folder would be empty.

Not sure how it came to be this way, but it looks like it might be a problem with how the zip is packed, and your tool of choice isn't dealing with it well.  I notice that 7zip displays the game's folder inside the zip as being nested inside a folder named "..".  Obviously, that's not ideal.

This game is cool! The sprites look great  and the music is really nice and the game is  fun, specially on later stages.

I'd like to see some other upgrades, like bigger bullets and spread shots. And maybe having a little indicator when there are only a few enemies left indicating the direction where they are would be really nice, although that's just my opinion, maybe it would conflict with the overall game design.

Thank you so much! I'm glad you liked it!

And yeah, earlier in development I had this long list of upgrade ideas that involved things somewhat similar to Binding Of Isaac or games like that have- bigger bullets, multishots, faster bullets, more damage, more shield, etc -but because I knew I was only going to have time to basically make an infinite game progression (rather than a fixed amount of levels) I could see all of that causing some major balance issues if the player could buy infinite amounts of each if they played well enough. I'm definitely not really satisfied with the actual upgrades that got in, but I think obviously the proof of concept at least got across to players.

Haha and I'm glad, those voice clips I did basically last second the day before it was due~

I agree.  By level 2 I was finding myself wishing I knew which way to go for that last room of enemies.  It was never too difficult, but when we're already short on time every bit helps!

This is a GREAT game!!  It seems to be one of the most complete experiences of the jam for me!  From great graphics, sound, voice over (is that you?) and fun - it ticks all the boxes!  And I'm a bit in awe how "simple" the idea is - yet that simplicity keeps it from becoming a muddled mess.  (That's one of my game dev issues.  My ideas are always too big for the time I have.)

Anyway, congrats!  Hope you keep it up and look forward to seeing more game from you!

Oh, and forgot to mention the trailer is awesome!!

Thank you so much! I'm really glad you enjoyed it and that it was a fulfilling experience for you heh. Also yes, I am the one who did the vocal clips for it (including the trailer).

I will say though that if the game looks simple, then to maintain your illusion you should not look at the source code XD The source is an absolute pile of spaghetti code.

I enjoyed the simple yet speedy nature of this game.  And I love the enemy sprites.

Thank you very much! I'm glad you enjoyed it!

Pro strat, mash all your shoot buttons at once!

Amazing game! I absolutely loved it! The esthetic is top notch and the music fits perfectly to the pace of the game (in top of being a gem). I played it several times with a controller (it’s much better than with the keyboard) but didn’t get further than level 5 :(. The theme is really well interpreted as the remaining time is the game “currency” and you can be a bit short on time when buying upgrades.

I'm so glad you liked it!!! My pal Mullywhizz absolutely pulled through with the music, and I'm glad that my game does it justice :3

And don't worry, I think I've only ever gotten to level 7 myself, it definitely ramps way up before you can play too long.

It would be nice to have a short textbox when buying the upgrades that explains what it does. For example, it's not very clear to me how the shield upgrade works. I thought it would prevent time from being eaten by the enemy when they hit you, but that does not seem to be the case.

And that's an absolutely valid point and I'm gonna be real with you... I'm not 100% sure if the shield upgrade even works. What it's supposed to do is increase the time you have invincibility frames for (which in this game is represented by that blue shield instead of flashing) but through all my testing I wasn't sure if it even made a perceptable difference. If I had another day or two, I definitely would have done more with the upgrades,

I'm glad you had some fun with it though!!