Collect enough resources to rebuild the gravitational crystal.
Submitted by Calame — 13 minutes, 21 seconds before the deadline
Add to collection 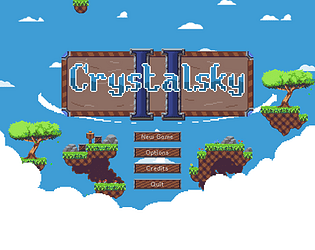 Great entry! Not much to add to existing comments. I feel that there are parts in the game that belong to the bigger plans you have for it, but currently do not make much sense like buying the floppy and having health bars.

I like the idea that you can buy "more land" in the game. While you went for the randomization wildcard, in a next version of the game I think I'd actually enjoy it more if the level remains consistent and you can more clearly see the results of buying more land (e.g. reaching places that you could not before, you no longer have to make some annoying jump etc.).

Overall a nice game. Encountered some physics issues like the player flipping when at a wall or sometimes standing in the air below a ledge. I get that the islands are randomly generated? If so, very good work, the architecture is fitting the game play nicely most of the time. Also the hub's layout teaches you everything you need to know, very helpful!

I have some logical issues however. First, the islands absorb gravity and thus starting to float feels contradictory. Second, why did the player not absorb gravity the same way and falls to his death? Yes, for game play reasons, but the story you have in the game doesn't support this. Lastly it would be a charm to not collide with the small boxes you can destroy to find gold, because it's difficult to jump down of one if it's on a very small island. You don't collide with treasure chests, so why with the boxes?

Very nice little platform game, even though I think the development was into the story and animations more than the actual gameplay itself.
Controls are not that bad, and with a soothing atmosphere it is very relaxing looking for resources randomly displaced.
Anyway, I didn't quite understand the life mechanic, since you can even buy a floppy for an additional life bar, but actual dying on traps or falling of an island doesn't make you lose resources, just forces you to restart from the hub (and you can spam this to make gold with the box on the left since it respawns).
I read on your page that you are planning to add enemies, maybe in the future you can revisit this feature.
The bakudas' asset pack you used really matches the idea of floating island, and the little floating effect you guys gave made them even more realistic.
Good use of the three wild cards!

wooow!.. this game is soo awsm...how do u add voice and animation in you game?

Thank you! I'm very happy you liked it! The intro was made with an AnimationPlayer with audio track and a lot of keyframes for many sprites.

Yup..thanks.. I will going to complete it

Nice small touches like voice acting, "Not alive anymore",  funny font and the fact that you fall down in a manner that makes you feel that you are REALLY high up.

A bit of annoyance when a player faces the wall and walks into it sometimes player flips his orientation backwards and forwards like crazy.

Also, continuing little touches theme, if you make jumping in this sort of games (which is usually the main action of the game),  consider making jumping action feel REAL good and cool. This one is a lacklaster a bit.

E two times when opening a chest and grapping an item feels excessive. One is more fitting.
Ctrl to attack with E to interact is an ergonomics nightmare.

That is some very nice feedback! Thank you! We are working on adding the stuff we didn't have time to. I will definitely change a few things. :P