To The DogsView game page

Turn based prototype
Submitted by Simonelmono (@comeback_golf) — 20 hours, 13 minutes before the deadline
Add to collection 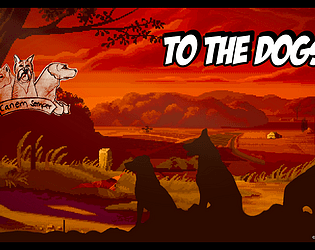 To The Dogs's itch.io page

The game looked awesome. It's a shame you couldn't finish it in time. Keep up the good work.

I loved the art style!

Submitted
Deep of the Water
LikeReply
Lord AvocadoSubmitted108 days ago(+1)

I really liked it! I really hope you keep working on it! That was great! I'll keep an eye on this! Great work!

I love the start of this! I do hope you keep developing it. I am excited to see your take on Into the Breach. The art was very cute, and very impressive. You even got an AI working within the jam! That is a huge accomplishment, and something I am afraid to try. Good job, and I do hope you keep working on it.

Looks good and has promised. Hope you keep working on it, would be interesting to see a working version.

thanks I’ll be updating as I go. Look forward to playing your game!

The concept is great, but I think you don't need to stop even now :) Maybe at the end of jam events, you can do more. I'll want to play :) Good luck!

I think the game looked good, but it lacked functionality. However, I've been playing a lot of tactics-based games like this recently, so I applaud the effort that was put into this.

thanks Dan.yeah the game systems are way more complex than I realized. It’s my first strategy game so I bit off way more than I could chew. But I want to keep developing it and hopefully I’ll get something that gameplay testers can try out within the year.

Sounds like a solid plan. Yeah, there was a bit of functionality (mostly gameplay tweaks) that I wanted to implement, but by the time that the game was ready for it, I decided to call it. It wasn't perfect, but I was content with it, the people who did test out my game never reported any game breaking bugs, just the original texture button flaw when entering "planting" mode. I'm 99% sure that I managed to find all the game breaking ones.

The biggest flaw in my game, personally, is the lack in gameplay design rather than the code. I was lucky enough to have one friend record himself playing the game for a while and send it to me. Watching someone play your game is not only interesting, but it really gives you some insight as to how someone other than you will play it. I assumed the original button issue would be a minor inconvenience at best, and only take the player a moment to realize you had to click on the plant sprite itself to enter "plant" mode. That was not the case at all.

Yeah it’s so good to have other play. I look forward to trying yours out!

Great Idea for a game! Next time I would focus less on the fantastic art and a little on making the game functional. Design was amazing, again, I loved it.

Also, for future reference, when exporting to windows go to  Options >> Binary Formats >> Embed Pck and set that to true. It will make your pck ingrained into the game.

Also disable the debug console as well (when you select the Export button and are almost done and all you need to do is choose the destination, it will be there on the bottom left of the screen).

Submitted
Give and Grow
LikeReply
SimonelmonoDeveloper110 days ago(+1)