Free the town of the bandit crabs reign! Made for GMTK Jam
Submitted by Dito Seregin (@terzalo) — 14 hours, 4 minutes before the deadline
Add to collection 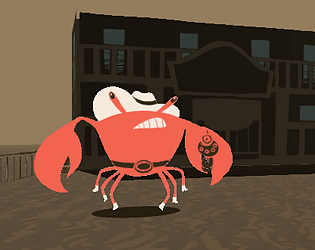 How does your submission match the theme?
You can shoot enemies with your gun as well as reflect their bullets. Shooting multiple enemies without lowering your gun gives you more bullets, and bullets are also your score points.

Outstandingly good stuff! Love the ammo reloading minigame. The reflecting bullets mechanic is pretty cool too! I'd say there's a lack of feedback of where you get shot from, and the aiming in the game can be a bit of a pain: otherwise this is a really cool entry.

Besides looking feeling and sounding really cool, the reflecting bullets thing is clever, and a few small design tweaks could really change it into something that could be expanded upon really nicely. For example, the 'shooting multiple enemies without lowering' mechanic is really cool, but the reward is kinda self-defeating as getting shots more accurately/ faster probably means you aren't burning as much ammo, but if you aren't doing well and need to hide away to reload more often (reloadings pretty cool btw), you'll inevitably get stuck without any way to get more ammo. Overall really cool use of the design theme.

Impressive! I was a big fan of the reload mechanics.

I wasn't sure what was going on in regards to "deflecting bullets" though...

Thank you! If you put the gun between you and the enemy at the time they shoot, you block a bullet and take no damage. It's definitely not communicated very well, sorry for that!

This game is very nice. Good job man. I managed to finish the game pretty quickly. At first the reloading feels a bit weird but after playing it a couple time i managed to hit about 9/10 bullets on reload and about 75% of the shots. Its a very nice little game! I did find a small bug though, Some of the buildings can be walked through. This game is still amazing though and honestly deserves one of the top spots for originality.

what this guy said, adding on that the music track is perfect for it and this game manages to get quite a bit of level design out of a few assets.