Bullets make you lose control
Submitted by MeHigh — 4 minutes, 1 second before the deadline
Add to collection 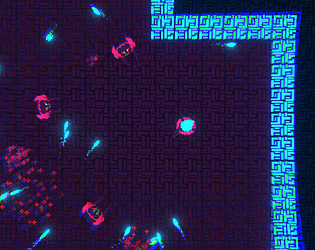 How does your game fit the theme?
Bullets make you lose control

Hey! Love the visuals! I think our game shares some similarities too! Check ours out!

Didn't use the slow mo, just died a lot, but I had fun the whole time! Having to dodge your bullets as well as the enemies feels like a digital game of dodgeball lol Also the visuals look awesome! The only improvement I felt was necessary as a better transition between levels. But great work nonetheless!

Nice game, it looks quite nice and the bullets duplicating after hitting a wall is a quite interesting mechanic! It also remembered me a lot of a game I worked on a looooong time ago: both of them have the slowmo thing and are topdown, so it was quite nice to see something similar :)

Hope you won't mind some feedback: I would suggest to not have the music reset when the player tries again. It might seem like a small thing, but it gets a bit annoying after some time to keep hearing the beginning of the music. Also, likes CerosWare said, the teleporting is bit disorienting, and a timer or some other indicator would be nice!

Neon,bloom,chromatic abbreation ,you got it all that i love, amazing game.

It took me some time, but I realized you were transporting randomly between levels. But it would have been clearer with some kind of timer on screen. Also, teleporting as it is now it's very disorienting (by the sudden camera movement).
That said, it's simple yet fun game. Loved how you can kill yourself with the same bullets you created.

The neon colors and the time slowing effect are really well made. The mechanic is a really good idea, but it can easily be avoided by just not shooting any bullets and waiting for the level to pass. Forcing the player to shoot, or only completing the level when all enemies are dead could have been better solution in my opinion, but it's a great game regardless.

There are four rooms, and you are randomly teleported from one room to another, you only win when you kill all the enemies in all of the rooms. You can't finish the game without shooting

Tough you are right, we should have provided some instructions on how to win and what you have to.

Submitted
Out of Controls
LikeReply