Submitted by KittenBox (@KittenBoxGames) — 3 minutes, 34 seconds before the deadline
Add to collection 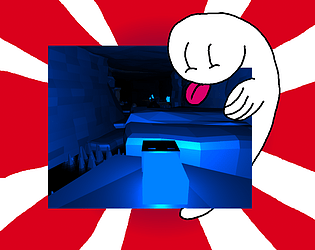 Very neat idea, I just wish there was a visible arc to see where your jump will send you.

Really cool! It reminds me of snake pass! I have one big issue tho. I can't figure out what to do with the other blue cube creature! I know what I'm supposed to be doing; but nothing is happening! (That was not a joke lol)

That's a known issue. The first one is supposed to enable your light, but its enabled from the beginning by accident.

Hey Nice little game, I can see the potential in a  game like this for mobile, albeit a bit more focused.

What I am trying to say is that I find it in the middle of an open world platformer which would probably need more features, and the opposite, a more streamlined experience based on the jumping precission.

Some technical feedback:
- I would have enjoyed it a lot more without glitches too, but that's normal in a jam :)

- Also consider billboarding the floating messages as the camera isn't that comfortable.

- The visual feedback on the jump charge (pink) continues and keeps shrinking while jumping.

an escape/exit button would be nice other wise really great

You might say that its a game jam game, but this honestly looks to me like a prototype of the next hit platformer (successor for snake pass maybe?) I couldn't get pass the gliding part (no idea where to go), but the base concept is really awesome and can be expanded on in many different ways. I hope you make a full game out of this :)

(P.S. not sure if its a bug, but I discovered that if I stick to a wall, face my character so that its side is to that wall, then click to jump a bit and quickly move my mouse back, I can go higher, making it possible to scale vertical walls on my own without doing the wall jump trick. Even if this is a bug, it was really cool when I found it and I had a tonne of fun using that trick, so as far as I'm concerned its an intended feature :))