The Legend of SleezerView game page

Defeat the Evil Monster and Save the World!
Submitted by Code Monkey (@UnityCodeMonkey) — 1 day, 5 hours before the deadline
Add to collection 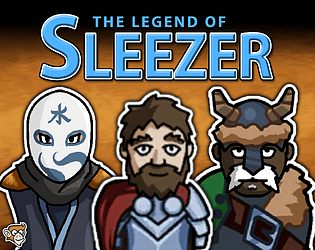 The Legend of Sleezer's itch.io page

- You have a extremely annoying small sidekick. Who will in particular randomly trip you over giggle and say don't mind me.
Despite having no likeable characteristics everyone in the game your character included loves this piece of trash. Suggested name Sleezer
- You can only input up to 4 lowercase letters for you and your party's names, but the default presets are all clearly over that limit while also being horrible names.
- Redeeming codes found under the cap of participating Mountain Dew beverages unlocks powerful armor covered in Mountain Dew branding.
If you abstain from the promotion, your party will occasionally comment about how good a Mountain Dew would taste about now.
- There is a minor NPC early on in the game that shares the exact character model as the player.
This is never explained or acknowledged by anyone in the game.
- Deep bass "ooohhh nooooo!" every time you die
- The 'Interact' button to talk to an NPC is the same button as 'Use Consumable Item', which is a precious resource.
- The player character sprite in the overworld doesn't look like the portrait
- Not having a way to tell you how much time you've played.
- After you get the main villain's HP close to zero, a cutscene plays out in which the villain overpowers your character and takes them captive.

Thanks for this very unique game jam!

Nice of you to give Sleezer a nemesis mechanic every once in a while.

You win the prize for Worst Sleezer. I like how the specials of our three party members serve their own important purpose in battles, pointless as they may be. I forgot what this jam was about for a second and when Oh No played on a character's death it really got me.

I have no access too a pc currently so this one haveing a great video gave it a leg for sure. But man this looks like such great implementation of the ingredients that triping  looks so vile. Also love the flying off screen deaths. You have my vote.

Really great game! The RPG encounters took a surprising amount of thought to get through them. Sleezer was perfect, and the boss fights/cutscenes were great as well.

Love the Sleazer implementation, Seeing him slowly run up to you for a trip and you not being able to do anything about it is perfect

And of course that ending was great. I just wish there was music and sound!

The game definitely lives up to it's name, Sleezer was great/vile.