Cahrsurraurher's up to no good again, it's up to Glinny to put him in his place.
Submitted by KevRevDev (@KevRevDev) — 16 hours, 17 minutes before the deadline
Add to collection 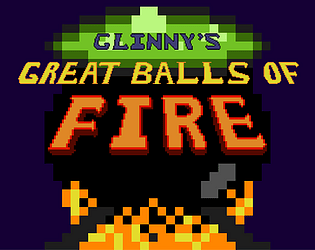 - You have a 1% chance to not be able to double jump
- Spells that inflict status effects virtually never work on bosses
- First waterfall has a secret cave, following 23 do not
- Instant death from the SIDE of a spike. Not the dangerous points, the side.
- Every loading screen is a bright blank white screen
- Final boss is character first introduced directly prior to the final boss fight
- Game has a hunger meter, when hungry a loud grumbling sound will play. This sound can drown out important dialogue and sounds
- No buildings can be entered, anytime you attempt to enter one your character says “It’s not the right time for that”
- The game’s soundtrack is written by Nobuo Uematsu, but performed by 4th graders on recorders.
- Every town has a mandatory Bad Anime Hot Spring scene.

This game is so hard!
Really liked the spells though, I love how you can combine the oil and fire!

Perfect score from me!

Awesome game, and perfect implementation from the vile ingredients you chose!

Submitted
Journey to the west
LikeReply
KyleBosmanHost2 years ago

I like the consideration that went into the different spells we unlock and the enemies that are introduced alongside them. Probably my favorite use of doors we can't enter. I hate those birds worse than anything.

Thanks Kyle! The birds can be a pain if not dealt with properly, the poison and paralyze spells work the best! Did you manage to make it to the end of the game?

I did, though mostly because I found a disgusting strat (exploit) for the final boss. I did miss the second spell (probably behind the first waterfall, I realized too late)

Great use of the ingredients, like the use of the not being able to enter buildings and the general Zelda 2 feel. I got stuck on the part of the 3rd level where the reset point is by the 3 spikes. After 15 or so attempts I gave up. Really good fun though!

Thanks for trying out the game! That area is pretty tough, was there a particular spot that you couldn't get past?

It was the part just above the respawn point where there are spikes acting as lava on the ground, you have these floating blocks with a red skeleton and two birds dive bombing you. I would just get stuck in a section where I'd be continuously hit by birds and red bones. If it was just the skeleton I definitely would have got past it. Was fun though... but there are more games I want to play from this jam so I had to quit!

Gotcha, the paralyze spell works wonders in that section.

But it runs the MP down pretty quickly.

This was a fantastic implementation of all the ingredients, congratulations!
I couldn't beat the game though, I always run out of MP in the knight fight, even if all my fire spells hit the boss. Can I get some help here?

There's a melee attack! It's mouse right click on keyboard or the B button on controllers (You can check all the controls by pausing or checking the game page). It's actually quite a bit stronger than the fireball too!

Oooooh! I totally missed this. Thanks a lot!

I managed to finish it, such a good game, congratulations again.

You did such a fantastic job with the ways the ingredients were used! I kept swinging back and forth between being annoyed (in a funny way) and laughing hard at the way you used the inability to enter buildings. Very fun and challenging last boss too :D

I really liked how you implemented the ingredients and the Glinny lore, but I gotta be honest, the last "dungeon" was just too hard for me.

That's fair, it's a tough game! Thanks for playing through as much as you could.