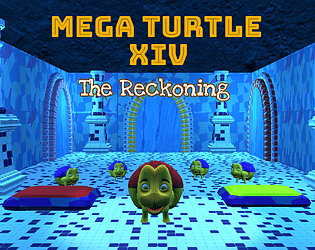 Does your game include art/sound packs or pre-prepared code?

Please provide a link to a 30 seconds gameplay video of your game
https://youtu.be/cRwqglhTz7U

Good job. I liked the turtles! The puzzle was pretty cool and it took me a minute to figure out. I had trouble seeing what  colour each door was. Maybe using more contrasting colours would be nice.

Thanks for playing the game on stream , you are right about the colors nice
glad you like it

Really fun game. I got stuck when I opened the last door one of the turtles I couldn't get to come back over to me so I could finish but other than that I loved it. Really amazing job and use of the theme!!!

Yea they happen was a random thing as I was watching another guy play your game and it didn't happen to him!! Amazing job with the game it was fun.

Thank you wish all the best

Great job on making this game! I love the puzzle element in it and I love the turtle family trying to leave the area. I initially thought that I have to go back and get the little turtles again but then when I reached the end, all the baby turtles followed. I want to see more puzzles :D. Love it!

Thanks so much :D We did consider letting the player go back and collect the turtles themselves, but thought this way was simpler for the player! So glad you enjoyed!

Hey, nice game! I know you've got plenty of comments about camera, but i still wanna say it - please invert the horizontal camera movement). The graphic's sween and the turtles are cute, i like it. I wonder is there a way to leave any turtles behind? I couldn't find it

Cheers! Absolutely re the camera haha, I think while making it I must have gotten used to the weird camera movement and not noticed how strange it was by the end xD There isn't currently a way to leave turtles behind, but it's a nice idea - it could be a choice to be made by the player whether or not to abandon them at the end!

Took me a minute to get the hang of it.
A decent challenge!

Now I'm eager to try and make this type of puzzle myself - in particular I'm curious about how one would represent this mathematically (I'm imagining a directed graph for starters).

[edit: in terms of the math, it is noteworthy that there is a correspondence between edges of the graph (doors), and nodes (buttons)]

Fab, glad to hear you got through it! Wow, I would be very interested to look more into this, I'm not much of a maths person myself but always keen to pick things up :D We didn't design the puzzle mathematically, but I imagine that if we went on to design more complex puzzles this sort of approach would be really useful!

I'm continuing to ponder this, because I think its really fascinating and useful to find interfaces between math and game design.
I'll share a couple of ideas I had.

I'm going to imagine a slightly simpler game. Let's say in this version, the requirement that all of the little turtles get to come home is relaxed (we might leave some oh darn).

Let's now imagine the game level as a graph that we are interested in traversing. The open doors are edges. But then, let's imagine that the buttons are like another passageway... that is, instead of the red button, there is a path to 'another universe' where one thing is different... this other universe is just a copy of the graph with a new edge to represent the door we just opened. In technical jargon,  we have performed something called 'graph rewriting'. Graph rewriting btw is a super profound and fascinating subject that connects to computer science, AI and biology . Now, essentially, we can just find a valid path in this new, much larger level to our destination. However, it's not immediately obvious how we actually go about solving this in practice... but one thing I start to think about - as a person solving the puzzle -  is that I can visualize essentially clusters of universes, and put them into a partial ordering, and then eliminate the ones that don't make sense, eventually constructing a valid set of moves for my agent to reach the destination. As an example from your game, there is a button at the end that opens some doors... obviously we can't walk through those doors before we have pressed that button, so in essence, we can eliminate walking through the alternate universe where those doors are open from the portion of our strategy leading up to us reaching that button [or a similar button in a alternate universe]. Basically we are just solving a maze at this point.

One of the interesting ideas that pops out of this, is we can offer players more radical challenges by doing more with the graph rewrite step. Like a simple example would be one door opens but another shuts. A more complex and fascinating option would be, some of the rooms take on a new arrangement. The challenge then becomes teaching the player how to handle these more extreme puzzles.

All right, here's the wrap-up. I just want to finish by saying of course I really enjoyed your game and the quality of elegance it offers. It can be really great to think about these things as a mental exercise if nothing else.

Now wrapping up the theory I offered here... above I described a way of reframing your game as a maze... but one thing is still left out: how do we handle the remaining turtles? Well, I don't have a general solution thought up yet, but as a practical one - if you wanted to make more levels without thinking too hard - you could reuse the motif you have in the first level of releasing the remaining turtles all at the end in one move.

Cool idea, I think the camera could be improved tho. I really like those turtles !

Thank you! Agreed, I think the camera will be the first thing we work on in the polished version aha!

Reall y nice, short puzzle game  with a cute theme  to it.
I am quite bad at switch puzzles but  after a bit of trial and error I got the hang of it. Just hard enough to give you something to  think about,  not so hard  as to feel unfair or purposefully obtuse.  The colour coding of the buttons help it stay a lot less frustrating.

Thank you!! Glad to hear you felt the difficulty was fair :)

Thanks for the feedback
we really wanted to make a simple yet not hard puzzle , and we are so happy to hear it come out as expected

Interseting game ! I would like to play the other 14 mega turtle games as well :D Like other people said the camera is a bit weird also maybe add an option to reverse the camera controls i found myself doing the opposite of what i wanted to happen :/ There are some walls that are inside of eachother  becouse of that some textures flicker. You can use probuilder to make everything snap to a grid i belive :D Overall it was a fun experince keep up the good work :]

wow you have a keen eye for details , thanks for the feedback i am so happy you like it , and we are going to fix both camera and walls

Not going to lie I thought I was going to end up sacrificing those little babies to save myself. But I love puzzle games so this was super fun, great job cannot wait to see more.

This is a great puzzle game! Good job, I really enjoyed that.
The only thing that is a bit annoying for me is that camera movement make it a little hard to see the doors.

Thanks for the feedback Amin :) I agree that it's a bit hard to see which doors are which sometimes, I considered adding a camera which gives you an overview of the whole level (or perhaps a map?) at one point but ran out of time sadly.

I am very happy to hear that you liked it , we will fix the camera for sure thanks for the feedback

I enjoyed this game loop. I found the camera and movement a little jarring at times but you soon get used to it. The riddle was satisfying to solve and generally it was time nicely spent.

Thank you for your feedback, much appreciated :D