Pile up corpses!
Submitted by kaosklown — 5 minutes, 51 seconds before the deadline
Add to collection 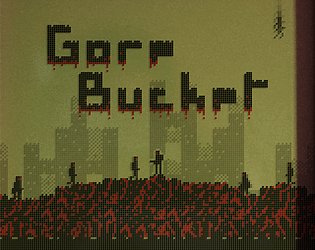 The effect of the bodies and the image of the console are a great detail! I really liked the music

Submitted
Pip and the Dark forest
LikeReply
br0ken_m1ndSubmitted1 year ago

Wow! Pretty cool and the pile of bodies is a nice touch! Very nice! Well done!

If there was a criteria for virtual tangibility this would def get all the marks ! There's so much potential for level and puzzle making here, like high exits where you would need to pile up the corpses in a specific way to get to, different types of zombies like bigger ones which dispenses 5 times more gore, or an acidic zombie which dissolves corpses in a radius, and even exits that are blocked so you must only shoot certain zombies as not to further pile over the exit. What you have here is a very solid sandbox and a very good base to build something upon !

Yeah I have to try to make something out of this gore mechanic...

Really clever use of the GameBoy, and I loved stacking up the enemies! Would definitely benefit from more levels.

Peak Gameboy-ness for sure! I especially like how you kept the shadows on the edges of the screen from the Gameboy itself, that's a great and accurate detail.

Your gore fill algorithm is really impressive! I like how mechanically it makes ledges that used to be safe for some aerial potshots slowly into unsafe areas, and then finally inaccessible. The way you calculate how body parts trickle downhill to fill in the lowest areas is fascinating, I especially like how the little gaps under platforms naturally form. I'd love to learn about your implementation.

Your movement mechanics are quite strong too, I like how momentum is carried in midair, and it's quite smart how you start the player falling and sliding down the ledge, to subtly prompt a wall jump.

I think gameplay-wise, you'd benefit a lot from more than one enemy type, especially one that moves faster. You might also want something that can either climb over or pass through walls: there were lots of times where I had corralled enemies into a small space where they were stuck. Having an enemy type that could escape those situations and put pressure on the player would go a long way towards keeping things interesting.

Yeah I agree, it really needs more interesting enemies or even challenges. In fact I originally planned a more complex gameplay, but ended up not having time for it... Partly because I spent way too much time making pixels of the GB LCD Screen have shadows and all ^^. Not a very smart move, but I had so much fun that I don't regret it !

I also spent one full day on the song which, again, should have been done after the gameplay was finished...

The fill algorithm is quite simple, when an enemy dies, I search for the closest tile that can accept gore. Meaning a tile that has less gore than the current one but that has neighboring tiles at least at the same level of gore. That way I end up having a pile that "spreads".

Visually it is just a tileset with 4 levels of gore per tile and 3 backgrounds to chose from (all ofthis in 4 variants).

This is the complete Level TileSet, It's quite limited due to the gore system limitations, but I didn't really mind as in the end the level just gets obscured by gore.

This mechanic of body piles is actually quite fun, I'd love to find a good idea gameplay-wise to make good use of it.

Thanks for sharing your implementation! It's a lot simpler than I expected, it feels pretty complex. Very nice!
I'm right there with you on spending too long on the song, I made a rhythm game and took 2 days on mine. I couldn't move forward with other features until I had a song in, but I was really stuck on it. Turned out just fine, but I lost a lot of time to it... I learned a lot about Western musical tropes, though.
I look forward to seeing what you make out of the pile mechanic!

I shouted in glee when I saw the actual gameboy on the screen.

Really cool, both functionally and visually!

I would have also liked to see some extra variety in there.

In any case, very cool entry.