A short Plattformer.
Submitted by HTX Games — 15 hours, 27 minutes before the deadline
Add to collection 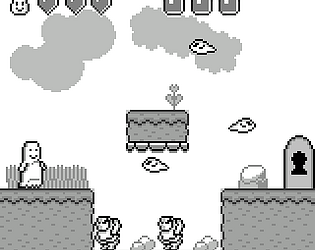 I really like the idea here! I used all my bullets at the start without realizing I could jump on enemies, but everything worked out just fine.
The art is very cute, your backgrounds are simple but very effective. The boss fight was cool.
I had a great time!

Thank you for playing and thanks for the pleasure :)

Nice platformer game :) I liked the concept that it's a one screen level.

Other thing was the doors, once I didn't knew what happened, then I realized I was near the door and that's why I jumped to another level.
Overall it was quite nice.

The collision really needs some fine Tuning and I should have made a door opening Animation.

Dang giving me Ghostbusters NES vibes with that ending grammar

Jk. not srs. doesn't matter. Otherwise cute little jumpy game; bopping  on dudes felt pretty good and the projectile piercing through stuff was neato. Could the snakes only be killed with the projectile? If you ran out before encountering one, what would you do? Just have to reset? That doesn't sound rad...

Uhh some other gripes... There were only like - two sound effects? I wouldn't complain with there being a low variety, it just seems inconsistent at that point. Though the two that were there were pretty satisfying sounding.

I did not expect a FINAL BOSS; as simple as it was I was a lil shook, decently commendable

Thank you for playing Ghost Arena. The snakes have two lives, so you have to jump on them twice. but beware, they do a counter attack. The Sound effects were the last Thing i took car of. Originally, I wanted to make more bosses, but in time it was not possible.