A game about sea battles. Made for GBJam 7.
Submitted by tomqz (@_tomqz) — 1 day, 8 hours before the deadline
Add to collection 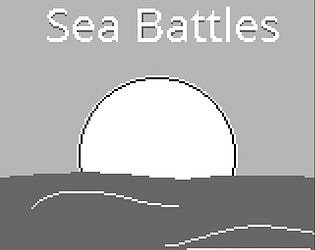 I liked how the game looked and the concept of a ship game is always fun.  The movement, while on the more realistic side, did make it really hard to fight enemies without getting out of range and spamming them.  As far as the graphics go they do look nice and together.  I'd suggest looking at a this tutorial to fix the rotation since it's not accurate to the gameboy in this game.

I like the look and feel of it. It's worth noting, though, that when the boat rotates, it does not conform to the pixel grid of the gameboy, but rotates all of the pixels it is made of instead.

From a gameplay perspective, I'd say that it doesn't really seem like there's a way the player can engage with the turrets without either taking damage or just shooting at them from out of range. This would probably be improved by improving the player's maneuverability in some way, like allowing them to move backwards.

Not working for me on Mac =/
The error message says:
Unable to find game!!:

Thanks for your feedback! I uploaded a .dmg for the game - it should work now.

Funny thing is, that GameMaker (or maybe Apple?) messes things up when it's packed with zip. When unpacking the game, some of the paths are missing.

The look of the game is great, it really looks like it was a in the early 90s released Gameboy game. The controlls are fine. It is a difficult game though. I came not so far yet.

I really like the idea! But it was a bit hard for me to hit anything...

You should totally check out my game, I made a naval game as well,  but in 3D ;-)

Submitted
Whaling On Me
LikeReply
GohanksSubmitted215 days ago(+1)

Awesome concept. I was able to trick the turrets by staying just on the limit of their range, so that's something to fix. A challenging and fun game thought :)

I thought I manage to do more, unfortunately this time period wasn't as good for me as I hoped it would. Hopefully you'll enjoy what I've done. Happy sailing!