A one-player game of cooperation
Submitted by Delca (@delcaw) — 1 hour, 21 minutes before the deadline
Add to collection

I have to admit I usually get tired of this mechanic pretty quickly, because it's ostensibly about puzzles but very swiftly descends into punishing you for execution — if you make one wrong move, you basically have to start the entire puzzle over, because you need to stay synched with your twin.  There's also a lot of waiting around while recording, to make sure you have enough time to do everything.  I'm basically subtweeting Talos Principle here.

But you've made a few very nice touches to avoid that, which I greatly appreciate!  Single-screen puzzles can't get too out of hand, the amount of time you can record is fairly severely limited, and your clone stays in place once the time runs out.

I'm also intrigued by having the record and playback buttons in different places, so I have to deliberately jump uselessly against walls at times to record actions that will play back correctly later.  It reminds me of desync'd Doom levels.  I think a single puzzle in Braid requires a similar tactic, though in a much more minor way.

Unfortunately I don't think I can finish it; I'm having a strange rendering problem where the floor appears one tile below where it actually is, and it's making later levels very difficult to coordinate.  But thank you for this fun entry in a genre that often veers into the tedious.  :)

First, thanks for playing and commenting! Separating buttons was mandatory to execute some of the puzzle I had in mind when designing them, however I did not manage to fit them into a single screen yet...

On another note, I am interested in getting some more feedback about this rendering error, since a friend of mine reported the same issue but I was not able to reproduce it on my computer. Can you read the text on the very first level ? For time constraint reasons text and background are displayed with the same code, so an answer or even a screenshot could go a long way to help me fix the issue.

I can read the text, though it's a little goofy.  Here's how it looks for me, in both Firefox and Chromium: 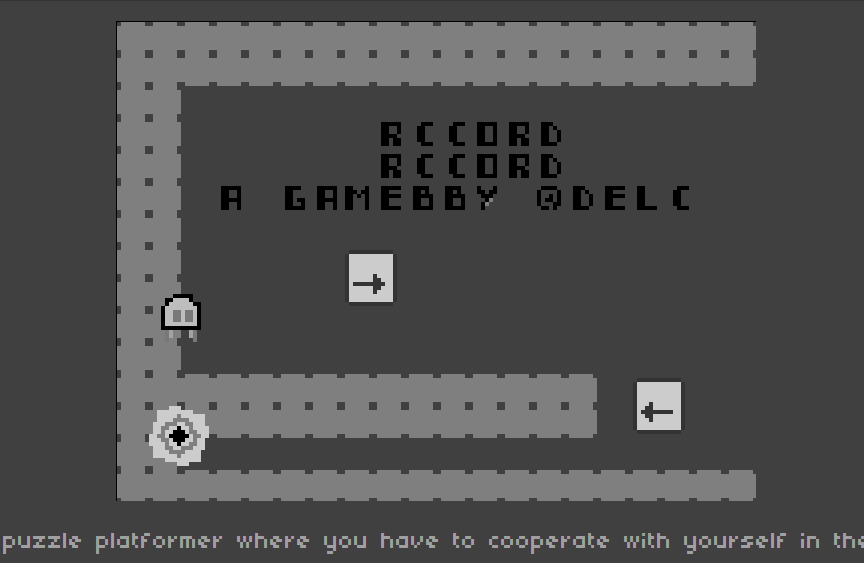 Thanks a lot for the feedback! I have been able to locate the problem with the help of a friend, but had no chance with finding a fix, so I just changed the way both backgrounds and text are rendered. It should be working right now.

I think there could be some interesting puzzle possibilities in having multiple record and playback points, although that might be tricky without increasing the level size to give more layout space.

Thanks for the suggestions ! I did follow the same thoughts that you had but chose smaller, one-screen sized level because they were easier to create; but nothing actually restricts the level size, I actually had to block the camera's movement.

That sounds like a good reason to stick to small puzzles to me :)