Gravitational avoid 'em up
Submitted by CHz (@CHz16) — 7 hours, 44 minutes before the deadline
Add to collection 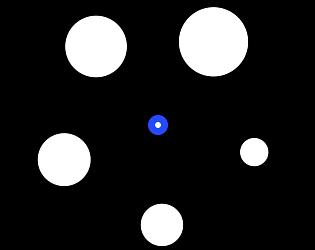 I love how much character you fit in here just by adding a little screen-shake and doing some weird things with audio.  The whole game is built out of a single primitive, but it has far more personality than it would if anyone else had made it.  Damn.  Bravo.

The art & sound direction in the things I make is mostly just practical, because I'm bad at the Drawing and extremely bad at the Music, so I'm really grateful to hear that I was able to sneak some expressivity through some circles bonking off each other.

The game is simple but really fun to play once you find a good strategy and try to stick to it! I got to the high 47000 with two bodies, as this is the setting where I felt I could best control the other bodies' trajectory. Is it possible to avoid the collision right after the beginning though ? I could never manage to do it ...

With two bodies it is possible, but hard, to make it out of the start without getting hit: I can usually do it about 3/4 of the time if I head through one of the two gaps and try to loop around the smaller body so both bodies end up slingshotting away. But with three or more bodies, there's no chance of getting out without getting hit haha. That's something I really don't like about the game, but I didn't have time to play around with other starting configurations.

I probably could've spent a whole extra week just tweaking all of the physics!

When I was a kid I had this one magnet maze puzzle where you had to guide a ball bearing (a "bee") from start to finish using a magnet, without letting the bee get close enough to the magnet that it snaps to it (getting "stung"). This reminds me of that, in game form.