Classic platforming action! Can you make it to The Last Level?
Submitted by Neon Pie Games — 12 hours, 38 minutes before the deadline
Add to collection 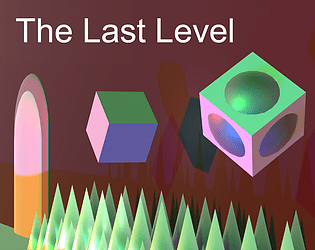 How many people worked on this game total?
1

Link to your source?
https://www.dropbox.com/s/n3vruusk85ih4tj/TheLastLevelSource.zip?dl=0

Very impressed by the logic of the game :) I think it is a great concept and has a hook to it.

Submitted
Rage of the Machine: Death is only the beginning
LikeReply
GasterbuzzerSubmitted235 days ago(+1)

Great game! I loved the voice over and movement, it all felt high quality. Its quite smart how you used the theme, would love to see more of this!

Thanks! I'm planning on updating things after the jam end so look forward to it! :)

Thanks! There actually wasn't anything in post process, I just had a set of colored directional lights that spin around to create the effect.

This was great! Playing the game backwards was actually genius. The voice acting really sold this for me. The visuals, using simple cubes and other primitive shapes were very pleasing to look at due to a good mix of lighting, colors and whatever post-processing effects you used. The narration was funny, although I found the recording quality was hit or miss there with some voice lines muffled a little, but that hardly took away from the experience. You got me good, 'cause I was wondering if it was a bug when I couldn't click the New Game button instead only the 'Continue' button and was pleasantly surprised it was part of the game mechanics :D Good game, I really enjoyed it!

glad you liked the idea! My recordings were super quick, so I might redo some of them or touch up the sound in the future

Nice game i could not get past the 1rst level (probably cuz of my skills LOL!) But i like it !

Nice twist playing levels backwards. Great work recording the lines! For the most part the controls felt good and the visuals were easy to understand except the start point of the level.

One issue I had was finding the playable square on new maps at first glance. Maybe adding some visual indication for a second on the player when the level starts could help. Also disabling players input for one second after losing a life isn't a bad idea as I sometimes would respawn adding some direction and jump inputs causing a 2nd life lost.

On my first play, when I arrived on the second level, 9, I rushed to the spikes thinking that was how the game was meant to be played. Only then that I understood you needed to reach the door before dying.

Another issue was with the wall jumps. It seemed like I could only do wall jumps with a face on the wall. If it was an edge the wall jump was inconsistent. This made the level design feel weird. Although the levels were interesting, requiring skill and intimidating as they were to be the last levels, they felt unfair as they relied on inconsistent mechanic. That could be just me being bad at the game.

thank you for the comment, and it's not just you with the wall jumping. A few people have mentioned it's inconsistency, so once the jam is over I'll be fixing that.

Hi! I found your game from https://itch.io/jam/gamedevtv-jam-2022/topic/2148162/feedback-for-everyone-windo.... I have tested and rated the game and here's my feedback about it:

Overall: really interesting concept twisting the natural expectations for video games. Unfortunately, due too some controls being to difficult I did not see how the narrative would have continued.

Can't wait to hear you opinions on my game!

First of all thank you so much for the feedback! This definitely gives me plenty to work with, and I'll be sure to try your game when I get the chance.

I think the confusion about when to die comes from the fact that you first need to reach the start of the level to activate it. I wanted to make more visual effects that distinguish when the level is active, but the only change is that the title is shown at the top, and some levels have extra spikes when active. If you die when the levels inactive it just restarts you automatically without showing the menu (I wanted to give it the feel of being in a test mode that differs from how the game would 'normally work')

As for the wall jumping  it did come out a bit weird. It works well if you wait for the cube to actually hit the wall, and then press the buttons as it's not slowed down by its momentum in the opposite direction, but holding the buttons down the wall jump happens slightly before touching the wall which is probably what messed it up. I think it's partially because of the spinning of the box, but also because of the trigger collider around the player used to identify what kind of surface you're on might be too big. I'll have to play around with some possible solutions for it, or at least explain it better like I just did now.

The narrations were completely improvised in like 5 minutes on the last day lol. If I'm updating this game, that's the first thing I'd work on. I think I'd keep what I have, but trim some lines down, and add new ones that explain things a bit better.

I'm glad to see that this game idea in general has potential, and I think once the jam is over I'll do some touch ups to fix these issues, and maybe add another level or two. Thanks again for the feedback! =)

Love the use of the theme! Platforming was pretty enjoyable as well :)

Thanks! Glad you had fun

Interesting concept. I think the opening voice over was a little too long, I'd already got my character to the start of the level before it finished. Then I died and went back a level and killed myself 3 times and got a game over. Then I tried getting to the start of the level but I died 3 times trying to get there and since I wasn't even sure that's what I was supposed to be doing, I gave up at that point.
Great visuals and sound. I liked the concept but it could have been clearer and do the levels get easier as you go? Obviously that works conceptually but there's a reason games usually go from easy to hard. I wonder if the levels could be designed so that the highest levels are hard forwards but easiest backwards?

Submitted
Death is just the beginning... for those left behind
LikeReply
Neon Pie GamesDeveloper239 days ago

thank you for the detailed feedback! I could've made it more clear that you need to reach the start of the level and then die to progress, and I tried to make the tough levels easier one way than the other, but it would've needed more testing to really work out. Also I probably should've done more than one take for the narration. I literally just came up with it on the spot and threw it in.

If I decide to expand upon the game, I'll know what needs to be worked on, so thanks again :)

Nice gameplay and level design. I had fun to play it :)

Thanks, glad you had fun :)

Great submission! I thought the controls were tight and worked well. I'm absolutely no good at it but that's definitely not the fault of the game haha. I do think the dying to go back a level is a little inconsistent though. Once we figure that out in the first level (last level) then I immediately killed myself only to find that's not quite how it works. Still, I liked the concept. Great work!

Thanks, and yeah I could've made it more clear that you die once the level is active. Glad you liked it though :)

Nice game! Gameplay is solid for being a cube. I like the meta aspect of of the game. Good choice of colors.