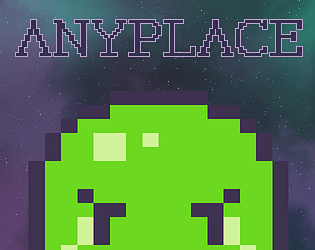 Felt a bit disoriented about what I was supposed to be doing at times, but I eventually figured stuff out, there's some nice ideas, but I'm not really 100% sure what I should think about the experience.

The active object at the end was quite funny tho.

The concept was really interesting, with different planets and gameplay bits. The shooting parts and the graphics were really solid :)

Had a lot fun playing the combat levels - loved that! Space feels a little empty though but that is space lol - ran into that issue ourselves with a previous Ludum Dare game jam game we did (Plutus). Great visuals and audio - might suggest a 2nd layer of stars with a slight parallax. Also loved the coordinate navigation/teleport system, was a good touch. Only complaint was that the ending for me also closed abruptly  before reading it

That ending was just plain bizarre, there was some kind of thanks for playing screen I could tell but it didn't show up for very long before the game spontaneously closed. XD

Also, this isn't really an RPG. What it does manage to be is a decent game.

This comment isn't very constructive :( 'decent game' or 'bizzare ending' doesn't give me any opportunity to make my game better. The thanks for playing screen closes after any input, so I don't think there's the problem. Maybe just didn't hit your taste?

Sorry, was kinda at the end of a session of playing several games from the jam when I posted this.

Let me give some more in-depth thoughts now...

The graphics and soundtrack are good. The gameplay variety was nice, though I would've appreciated it if the shooting sections did more than "here's a few almost identical enemy patterns over and over again" (they never dragged out too long thankfully). The ending came basically out of nowhere and I still am not 100% sure what words describe how I felt about it, if the right words to describe it even exist in any language on the entire planet, though I can say that, given that you needed a way to end the game logically at that point despite how early in the game it felt, it certain was a good way to handle it. XD

A tweak I'd recommend making for the "thanks for playing" screen and the cutscenes: Make it so the game won't let you skip lines of dialogue until about a few frames or so have passed. That way the cutscene won't progress just because the player was already holding a button the frame a cutscene started.

Also, don't get me wrong: I did enjoy the game. There was more that could have been done with it (if nothing else the shooting sections could've used a few more kinds of enemies), but I'm glad that I played it. :)

I found this very enjoyable and I really like the blend of genres. I don't know if it's a bug, but losing the second shooting level sent me back to the first level despite having beaten the platforming level. Nevertheless I've beaten the game. I get the impression that the developer was in quite the hurry to finish it at the end. It actually made for a hilarious ending! :)

All I can say is... now I finally know what the Active Object is.

Thank you! I was afraid some people are going to not like the game because of the genre melding, but I'm happy you found it entertaining. Indeed, I was very time pressured and I'm sure there are plenty of bugs and you're absolutely correct the ending was very improvised, but I'm happy with how it turned out and I hope people will enjoy it nonetheless

The shooting part is good enough to be a game all by itself, nice work.