Air hockey with lasers and explosions and stuff
Submitted by Pauloondra (@pauloondra_) — 32 days, 8 hours before the deadline
Add to collection 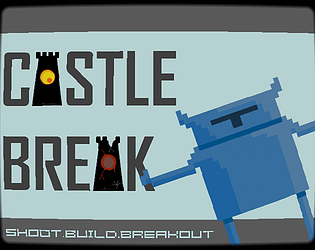 Let people know how long has this project been going, or share a bit of its history.
My first GMS project, started in April 2018. Going to make some updates and finish it with FFSJam!

Great game, the competitive break out works so well and with the 2d movement you can really be more strategic when setting up or intercepting shots.  I especially love the style like with the soldiers shifting back into place after getting hit, or marching up to take over the walls you were just fighting against.  Also how it adds elements of pong too when there is an enemy robot present.  I like that your army is preserved between levels so it incentivizes you to keep protecting them.  I will say I got a bit confused when it came to switching weapons, at least with walls you got a preview of what was selected so you knew.  With weapons I usually just left clicked when I lined up with enemies and hoped I had ammo lol.  Also when selecting a powerup a tooltip or name before picking them up would be helpful I think.  My game did crash when I started a new level though, maybe a level or 2 after the death fog level (30ish?  I wish I saw).  Anyways great game, fun, stylish and a novel idea!

My original idea was to make no interface outside of in-game elements, like they do in Dead Space or so. That's why enemy HP is towers and your HP is guys. But looks like I should try harder to make game info more readable, especially when bullet-hell with bunker blocks come to play. :)

As for changing weapons - it changes cross-hairs (little blue, big red and laser line) and little lamps on robot's back. And crosshairs hides when you have no Attack Points enough.

And yes, 30th level was the last, but now the game is endless. :) BTW, I've just uploaded the last version, which will go to Steam soon. And when it finally be released in steam, I must set the same price on itch.io too. So grab it until 19th, if you want :)

I loved how you used the ingame elements to display the health of your side and the opponents, that type of polish is my favorite.  I didn't even know there were cross hairs though, lol I will have to go back in a check it out.  Also good luck on your full release! :D

This was amazingly fun! I hadn't expected to get pulled into it so much when I started playing. I would agree with pfail that the bomb speed is a bit high. I feel like I don't have a chance to try to plan where I want to hit it to and instead have to just rush over and pray I manage to block it. As for minor details I would suggest toning down the fog a little on, I think it was level 6? I like the idea and how it changed things up but with the speed the bombs move it was really hard to spot them. All in all a great game!

Thanks for feedback! :) That's the real problem with unpredictable results of hits, I can't solve it :/

Fog got thicker if last level has fog too and all you can see is fire on the bomb and smoke trace - sorry, that is the feature :D Probably I'll make option to change game speed later, but now I really want to release it (I've wanted it for too long :) ) Grab it now, because I should turn off the free download option soon.

Wow, well, I think I can say with total confidence that this is the most complete and actually "finished" game that I've played for this jam so far.

The idea of taking Breakout/Pong style mechanics and making it a battle game is very clever in and of itself. But the whole power-up and progression system you've added (and the polish you've undoubtedly put into everything) really makes it shine. This is not my kind of game, and even I got hooked after a couple rounds. If you were able to make this a multiplayer game, I think it could do even better.

If I had any feedback, it's a couple minor things. Mostly I found the mouse sensitivity to be too much, and the speed that the bombs would bounce seemed crazy high, at least at first. If it could fit into your dev schedule, I could see a big benefit making those settings available to players. Even just a selection like "Normal / Fast / Ultra-Fast" for the bomb speed would be great. Lastly, I think a variety of music could go a long way. Whether it's something the player changes themselves, or something that changes as you progress, I personally could see that adding to the experience.

In any case, congratulations! You've made a fantastic and fun game.

Now I'm trying to finish and polish the game in this state (because I'm going to release it in steam next Monday). But later I'll probably try to add splitscreen PvP mode with controllers support.