You become what you kill!
Submitted by Chadderbox — 2 hours, 12 minutes before the deadline
Add to collection 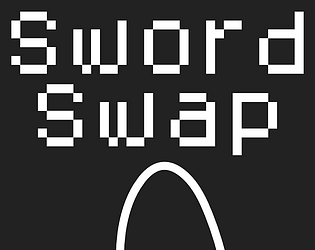 I'm continuing this game! Check it out at youtube.com/chadderbox! I'm taking in all your feedback and I'm going to make something actually good for once! (I hope lol)

Love it! Both art and music fit the game perfectly. The only thing I had a problem with is that I didn't understood the differences between the swords.

Thanks! I will remember this.

Firstly, fantastic job with the polish on this one. The music, art, and gameplay all gel together very well. I think the only real problem with the game would be variety. There are a lot of different weapons the player can consume, but they all play out in pretty much the same way. I think if the differences between the weapons were more dramatic, the gameplay loop would have much more longevity. For example, what if certain weapons increased speed, or if certain weapons couldn't break blocks but did more damage. Small changes like this could encourage the player to make more decisions while playing rather than just attacking everything in sight.

Overall though this is a pretty impressive jam game. From my playthroughs it seems like the levels are procedurally generated, which I know is no small task. The post processing, particle effects, music, and screen shake add a lot to the feel of the game as well, I'm excited to see what you make in the future!

Submitted
Dinner For a Lizard Wizard
LikeReply
ChadderboxDeveloper182 days ago

Awesome, I will take this into consideration next time!

Interesting that you think that. I suppose it isn't for everyone. I was going for something more methodical, but how would you say I could make it better?

Maybe if there were a reason for me to fight other swords besides upgrading/downgrading for the heck of it? Also the sword swing's path doesn't respond the way I as the player feel it should... it's missing some feedback or this hitboxes are off or something. Like I say I like the concept, but it feels like there's not much purpose to my floating around.

The point is to get score. You get score by fighting enemies.

The music sounds a bit weird, the camera movement is very glitchy and the player is super slow. Other than that, mediocre :(

Submitted
Change it up - Jam version
LikeReply
chrish_tan183 days ago(+1)

I love the take on the theme! Great job!

The game is well-made! I loved the concept of swapping into other swords with different advantages and difficulties (like how long is it to swing the tool, or how strong does it swing). The music is top-notch, gives me vibes of pokemon and such games.

However, many people might not know what to do when you're spawned. What do you do? Where should you go? That's the one thing i would change.

What would you say I do when the player has spawned?

Cool game! I think it would have been even better if you added more varied weapons, but still a very solid entry

Sure! You mean like types? Because there is 3 types over 23 weapons. I could have some ranged stuff, I suppose.

very good game, my favorite game that ive played from the jam so far :)

I like how you handled the theme and that the weapons all have different behaviors.

the sound is definitely better than mine

A great game but I wish there was a little more direction on what to do. A high 19/25.

Great Game! A bit slow paced and easy but overall pretty cool! The music is AMAZING!

This game got potential. I think the bloom is little too overkill. Reduce it a bit. The camera could get a bit smoother. The game's pace could get increased. There are some walls which can be walked through. Anyway this is a really good game!

SUCH a cool game! I honestly haven't got any thing to add other than to reiterate the point on more UI.

really cool game but some more UI, some more clear explaination about the stats of the weapons and different enemies behaviours would be appreciated

I will remember this next time.

Nice game, hurt my eyes a bit, and the hits didnt register when you were right next to someone but other that that it was great. Sounds were amazing.

You have to hit them with the blade, not the hilt, like an actual sword.

Awesome game! I really enjoyed playing your game, cool idea, i love small details, like the speed of the weapon and the different sfx for hitting bricks.

Consider checking out my game as well

Thanks a lot! Edit: I have already seen your game, I love the graphics!