Manage your night club, make money and fight with your enemies.
Submitted by Arludus — 11 hours, 45 seconds before the deadline
Add to collection 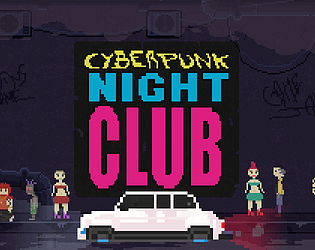 Interesting concept. I love the music.

Very nice, the music and visual design really set the tone nicely, and while the mechanics are simple they're also engaging enough I got all the upgrades and hit $500. I found the pace overall relaxing to begin with, but I bought the bartender immediately so I'm not sure if that sped up my game or not.
Also it's nice to see Construct 2 getting some love <3

If you're adding more mechanics going forward I'd suggest something interactive to do with the honest patrons? Maybe some sort of "rock paper scissors" action type choice for different types of patrons once you greet them? Learn the types of reply to get the most tips or risk loosing your tips with bad choices? Could also play into the up/down-votes thing you've got in.

Thank you :) yes the bartender can earn $ 20 more randomly when customers near the bar. I had imagined more mechanics of games, with choices to make for the team of the club and other things, but it's difficult to do everything in a time of 7 days, that's why the game is a bit simple and there are few interactions unfortunately. I'm not English so I have trouble understanding the latest questions, what does "rock papers scissors" mean? Is it about the popularity of the club? if that's it, for the moment it's partly random, the initial idea was to have to hire a better security team to filter the customers and influence the club's reputation.

"Rock Paper Scissors" is a game where after a count of 3 (or count of "Rock, paper, scissors!" two players make the shape of rock, paper or scissors with their hands at the same time and see who wins.

Its a pretty common idea in RTS games, where for example swordsmen beat spearmen, spearmen beat cavalry, cavalry beat swordsmen, that sort of thing. In this case I sort of meant maybe three different actions you can do with different types of customer, that if you get right you maybe get a boost in popularity/a better rating, or maybe a cash tip etc; but if you get it wrong it goes the other way? Maybe also a "neutral" reaction where nothing changes?

Only put it out there as I saw in another comment you were thinking of building on your game a little more after the jam so I thought I'd throw that idea out there just in case it gives you an idea in turn :D

All in all I think what you got done is pretty great especially for 7 days, believe me I understand the crunch of such a small timeframe hahaha

ah yes ok I understand, thank you :) I did not use this system, I was forced to do a random part for lack of time, the enemies also play on the popularity if they go back it takes an inch red (dislike ), and for the bar and the strip girl it's according to the customer's location and if it's a man or a woman. Women pay more at the bar, and men give their money in front of the strip girl.

I love the concept and the visuals as well, but the game felt very slow.

Thanks :) yes many people have told me, I think I have not adjusted enough the speed of progression.

Interesting game, It's really good..
Nice art style and the musics was good as well..

Congratulations on your entry for this gamejam!

Nice concept, nice execution. Pacing was a bit slow for my taste, but it's probably about right for the genre. Art and music are great!

Thank you :) yes the game is maybe a little too slow at the beginning of the game before having the improvements for the club.

Really cool seeing the nightclub grow and earning more and more. Music very athmospheric too. I liked it :)

Thanks, yes unfortunately I did not have time to implement all the mechanics of gameplay that I had imagined :)

Nice game, I think it is worth to keep developing it after jam

Thank you :) yes I think that I will perhaps continue to develop afterwards to improve the game and add mechanics of games and the duration of play.