A short choose your adventure game
Submitted by kartikey0303 — 30 minutes, 54 seconds before the deadline
Add to collection 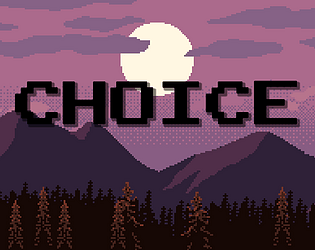 nice little game. I think I reached the end, because there was no text or buttons left to click. If you continue with this, make sure we know/see we reached the end of the story.
I missed some music/sound. the image was a very nice touch to a text based adventure. add more pictures to your adventure and this will be great to play. Characters are missing a bit of details compared with the background, but I guess this is because we only had one week.

Hello. Thanks for playing the game. The thing is we spent too much time on making a system to handle all the ink story and stuff. We did have an screen which would fade in but it caused some bugs in cases where an optional choice was selected. Speaking of optional choices, the games has some optional choices which can be unlocked by clicking some text in the dialogue e.g. "strange woman". This was our first game jam made by three newbie. We hope to make a better game next time and hopefully not a text adventure game because they are probably not the best choice for a game jam as they are not engaging enough.

Thanks again for trying the game.

I guess you ran against the same wall as me with a point and click. We both need a lot of text-images. many gametypes need 10-15 sprites and a good random generator to make a long game. But for your and my game, every second needs to be written out and programmed. I did learn a lot though, and hope so did you guys.

Yep we did learn a lot. Please hit me up if you are interested in making another game or participating in another game jam

The graphics are alright. Maybe you can add some animations and sound.

it is really impressive that you did it yourself but a little help would have allowed you to raise the level of the game! a background music and some sound effects would have made the experience an excellence. your pixel art is really good as I liked the idea of the game. Only note of disappointment is the fact that you could choose a complete font because the question marks are different for example and ruin the beautiful compositions you created

This is my game if you want to try and leave a comment: Superhero Academy

Yeah actually three people were involved in the game. Even we were honestly not very satisfied with the result even though it being our first game jam. We hope to make a better game next time.

Thanks for trying the game and providing honest feedback.

Enjoyed what I played! I liked the direction the game was going, a little more love and some ambient sounds would've really helped the game out. Flesh out the story and choices a bit and it could be a ton of fun

Thank you very much for playing the game. We were working on sounds and music but ran out of time. We were also working on more stories but again ran out of time. Also you click on text in the dialogue to unlock more choices. There are a total of 3 endings to this story. For the first option you can click on "strange woman" to unlock an option to interrogate the woman. Similar to this there are more hidden choices which can make the game more interesting and also reveal the true purpose of the characters in the game.

Thank you again for playing the game and we are thankful for the feedback as it was our first game jam.

Maybe you should add some sound effects

work more on graphics and it would be the best

try mine and tell me