A game about sucking the resources out of marbles
Submitted by gavzooka — 26 minutes, 19 seconds before the deadline
Add to collection 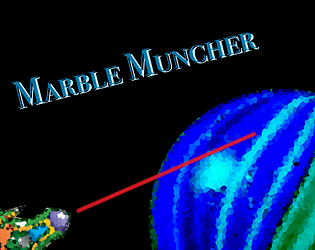 Not bad, but the camera and mini-map could use some work since they can be quite disorienting. Seems like a good game for time-wasting though. Good job!

Thanks for the feedback.   The mini map in the uploaded version is off and is fixed in the new version that I am updating offline.  I think the comments further down mention using lerp for the camera.....which is what I missed but will fix in the final version.  Thanks for playing and rating :)

I liked your artwork. I liked the idea. Audio was good. Dodging the missiles was fun.

I ran into a couple of bugs. One where my beam left my ship, but hung around on the stage. Another where I saw a bunch of ships. (Same as Leafenzo saw)

If you fix the bugs it'll be fun. (-1 overall for gamestopper bugs. I'll play it again after the jam if you update it.)

I noticed the left over beam also...after the Jam deadline...again...arggh!  I even knew what the issue was when I saw it but didn't have chance to fix.  Will be fixed in the post Jam release :)

The game is cool, but I can't play it more than 5 minutes, it gets boring. I like random system generation!

I think you should simplify gameplay a bit so people could actually do more stuff wtihout getting killed by a planet, which is hilarious.

Be sure to rate my game and leave some feedback too :) https://itch.io/jam/blackthornprodgamejam2/rate/37927

Thanks for the feedback.  I agree on the getting boring bit!  I planned a lot more but being my 1st Jam, over-scoped for what I could achieve...know better for next time!  I will be finishing it up properly post Jam though so please check back....Of course, I will head and rate yours too :)

This is a pretty dang good job for a first game :) You might want to lerp the camera zoom so it doesn't come to a stop immediately/start up so quickly. Also, maybe make it more clear to the player that there is a missile coming. A halo/glowing effect, or ever just some time to react. Because the first time you see it, you don't know to avoid it. Otherwise, good job, it was enjoyable

Thanks for the feedback. Lerp.... that’s what I needed! Spent ages trying to get a formula with a dampen combination working.  Forgot about Lerp.  Thanks. When Jam is over I’ll put that in the updated version.

The mini map is not always accurate, but I'm certainly glad it was there. The zooming out based off of how fast you move is neat, but that was sometimes a little sudden.

After you know to watch out for the missiles you can generally always dodge them, so they didn't often score cheap hits, which is really nice.

The sound effects were fine, although the mixing could be a bit loud at times.

I did end up eating all the planets in the first system which I thought was good enough to be the entire game, but then it went to a loading screen for the next system, even said it was randomly generating it? Which is pretty impressive.

But either way the second It loaded some pretty awesome glitches happened, it created about 50 of the player ships and then planets filled the screen along the edges. It was still playable for a little while although it was running a little slowly, it did crash after I tried harvesting the whole system with my fleet. Since the glitches happened after I had a full game to play it was honestly a pretty fun experience to mess around with.

Here's a screenshot. (By the way anyone reading this realize that this glitch happens after the main game and is not an example of the whole game whatsoever.)

Thanks for the feedback.  Really appreciated.  Think the minimap is rotating on the wrong axis on that version....I also spotted the glitch on generating the second level just after the deadline :(  I've fixed the logic bomb now and it all works on the version I have here...just can't upload at the minute.  Thanks again.

Sometimes I felt frustrated that I destroyed some planets and from nowhere a super fast bullet hit me and I died, kinda help less,

but besides that it was a nice entry, good job!

Submitted
Around the Galaxy
LikeReply
gavzookaDeveloper1 year ago

The idea is really great and I like how the camera moves away when you go faster. The music is cool and graphics are great. I wish I wouldn't be dying so much tho :)

Thanks for the feedback :)  It is a little tricky...I kept dying in play testing too!  Needs some tweaking I think.

Hey, for your first game this look pretty good! And its an interesting idea, too zoom out when moving faster. After I cleared the first Level the game tried to generate a new one and crushed. you might want to look at this.

Keep up the good work and your games will become better and better! :)

Thank you.  Appreciate the feedback.  I noticed the level transition issue just after the deadline passed :(. There was a logic bomb in my level generation code which is all fixed now but can’t upload yet.  Thanks again.

The concept was there inline with the theme but the lack of time to make it really took a hard toll. The minimap was a bit buggy it was moving at a weird origin point cuz when i rotate my ship it rotates but on a different origin. Wished you had more time to make it. Nonetheless well done submitting it. :)

Thanks.  Appreciate the feedback.  Aiming to add polish for after the Jam is all wrapped up :)

Too bad you had to rush it, but i like it as far as it is. Controls are feeling a bit off. I think it has to do with the zoom when you go faster/start moving. I got the idea, but it is like you are standing still for a second. Dodging rockets makes that difficult too. Maybe some smoothing like intertia or something to patch this up. And maybe a starry background so you see that you are moving if there are no planets on screen, i used the minimap for that ;) Overall pretty good! Again, i like it!!!

I can tell that it is not finished.

Damn, just noticed a major bug which I'll need to fix after scoring.  Get past the 1st generated level and the next level generation goes bananas.  It still generates but provides what seems to be an infinite amount of players, planets, etc.

Update:  Fixed on my version, little logic bomb....problem is there's now a bug after the 1st level with the mini map.