Keep on climbing that corporate ladder and make it to the top! Show your boss that you don't get frustrated easily.
Submitted by SystemLogoff (@darkdatatrc) — 23 hours, 21 minutes before the deadline
Add to collection 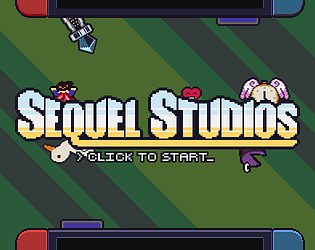 Elevator pitch
A sequel to the award winning best of theme game Pzzl. Use your mouse to play this interactive fiction game, with a warioware twist.

Describe how your game adheres to the theme
This game is technically a sequel to 4 of my previous games:

sHexEx - Brewing Beauty in this game is related to this game's lore.

Y2KThulhu - Sequel to the theme of fighting elder gods with belief.

The warioware twist games are all (copyright friendly) sequels to games, or the worst parts of games.

The games theme is also directly retells PZZL's theme, but from the other side.

The writing, sound and art are all fantastic.

Unfortunately I didn't really feel like there was much in the way of actual game-play as it didn't feel like you could actually lose? To a point I guess that's the humour of it and for that it kinda works if so but it does kind of take away from the investment in gameplay a tad I found.

It wasn't terribly obvious I needed to click on the Day X buttons to start a day, or rather it wasn't clear that they were in fact buttons. This left me kind of flailing at that screen wandering what the heck I was meant to do.

Yeah, the Day buttons are a huge issue, I've seen too many people miss those were buttons.

The lack of transitions makes the game feel like it has a bunch of abrupt stops which is as if its interrupting itself with itself throughout. Some kind of animated transition could have alleviated this. The games all being (I think?) impossible to lose is a fun idea but also becomes apparent really early on, so maybe they could have been altered a bit to either play up the fact that you can't lose with absurdist humour or perhaps by making it seem impossible that you can win? Neither of these things are all that important though and it still plays as a tight little package which those familiar with these jams will enjoy moreover for recognizing your previous games. It's fun, it's cute, and it shoots straight at you in a compact format that leaves you wanting more which is always the preferred state. I'm glad we had a similar idea and that at least one of us (you) proved it can be done well. Nice!

Fair, thank you for taking the time to write it out.

I will keep everything you said in mind going forward.

I wonder how many perfect ratings this game will get? I guess we'll have to be patient to find out.

Aww, thank you for saying that. 😊

The art is gorgeous through and through! While the story was cute and fun, there didn't feel as though there was much gameplay there. I more like I watched a cute short, though maybe that was the idea?

I tagged this game as an interactive fiction because the gameplay was less this time. It does hold close roots to PZZL though. So if you want more gameplay and less story, check the prequel out.

I did not notice the tag. Oops!  I'll check out PZZL too!

I played PZZL. It was cute. I figured out what was going when I spammed the answer button a bunch of times, but it's a funny, silly little idea with good presentation. Cheers!

LikeReply
Some Brothers StudioSubmitted3 years ago(+1)

Pixel art is so cool and absurdly well done. I'm insanely jealous how skilled you are. The juice and the wigglies are on-point. The story is concise but cute and told in a really slick style, just like the rest of the game. The actual gameplay is a little simple (is it possible to lose, even?) but since that's part of the joke I think that's totally okay. Good voice acting like usual.

Joy is very much a patient  woman who is very skilled at her job.