A quest to find Chiquininín. The smallest of the Popochius.
Submitted by Carenalga (@mapedorr) — 37 minutes, 6 seconds before the deadline
Add to collection 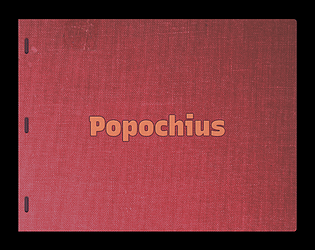 Charming aesthetic and presentation and some really interesting ideas in the book pages and multiple characters to control. There's a lot of room for fun puzzles and interactions there and I look forward to seeing the post-jam version. Cool stuff!

I'm glad you enjoyed the game and liked all those things. Looking forward to see you playing the post-jam version (I will be very grateful if you do).

very clever in presentation, progression and aesthetic. i really enjoyed the vibe and oddness of the characters, and the idea of having multiple characters to control for an adventure game is very interesting, though here it's only used to limited effect.

i really loved the idea of finding pages to the games 'instruction manual' within the game itself, and that also has strong potential as a mechanic in a very metroidvania way of discovering things you could probably have done all along.

my main nitpick with the game is the 'strong gating' you have in place, being unable to control interact with any of the characters before the game decides to give me permission. i teased out a sort of golden path, but it was really hard to figure out where the gates were -especially- as i tried to replay and get around the game's main bug. the main three characters at very least should be controllable from the word 'go'.

concerning the game's main bug: it is a shame, but having the characters disappear after what looks to be getting the note off the arcade without going through the dialogue, makes all the minor nitpicks that much worse. i tried 4 or 5 times to find a route that had the characters do what they needed to before triggering the bug, but it became too much. and then also the backpack seemed to be single use? i was hoping to carry all the characters around for their unique abilities, but could only use it on the one character, and then never again.

i also didn't understand the 'kissing' mechanic described in the manual. there certainly wasn't any ux feedback as to whether right clicking on any character did anything. they just seemed to wake up for dialog when the game let me.

again, these issues only really became issues because of that major bug and somehow understanding what to do put me in a worse spot as i now had to tease out that golden path again.

other ux nitpick is the dialog choices at the bottom of the screen were very hard to notice the first time, especially in the web browser. it does fit with the chosen aesthetic, but anything you can do to help draw attention to that area would be helpful.

once again, great concept, great aesthetic, loved the weirdness, and would love to see the mechanics of the characters more fully explored. great job!

Thank you very much for this very detailed comment.

I'm glad you liked the vibe of the game, its weirdness and presentation, and the "instructions manual" mechanic (but I can't take credit for the idea, though, because it's something I took from Tunic).

I greatly appreciate that despite all the bugs you tried more than once. I'll have to check the disappearing characters (because it should happen only to those you can control when you left a room (and there is still a lack of feedback on that action)). The backpack shouldn't be single-use, that's something I have to fix too.

I agree that the characters' abilities should be better exploited. Maybe I can include some of that in the post-jam version, but I feel that will be something I can better accomplish in a later game set in the same world. And the kissing mechanic is something I thought I would have the time to implement but couldn't in the end (and forgot to remove the thing from the manual). As for the "strong gating", I'll have to evaluate if the game experience is not greatly affected by allowing to control all the characters from the beginning, but it's an interesting analysis you make about it.

No one had mentioned the dialogue options, but I'll take your suggestions to make them more noticeable, and fit the aesthetics of everything else.

I'll try to play your game before the voting period ends.

It did seem very buggy, though--right-clicking the characters didn't do the special powers the book says it should. I wasn't able to get very far (I couldn't open the secret door in the cave) and I think that was why.

Hahaha, they aren't butts. I am very honored that you say it reminds you of the Amanita games, because that's the kind of games I'd like to make.

The right click mechanic is not implemented (I didn't have the time for doing so), but you don't need it to finish the game. Honeslty, I'll prefer if you give it another chance once the post-jam version is ready.

LikeReply
The IcehouseSubmitted218 days ago(+1)

The name of the game only sounds cute and funny. This is a very good game to play on a rainy evening! The style of the main character is unique :) Cool game!

Submitted
Shadow of The Morrigan
LikeReply
CarenalgaDeveloper218 days ago(+1)

I'm glad to see that you found the name of the game cute and funny, and that you liked the characters. That mood for playing the game sounds like a good thing to try. Thanks for your comment!

Adorable game and characters, with quite a unique gameplay!

Thanks for saying that so nicely. I'm really glad you mentioned the gameplay thing because that's something I want to achieve with the game.

Such a cute game! I love the Popochius and all their different voices! Unfortunately I encountered a bug near the end of the game where the book's pages weren't turning, so I didn't get to see what was on the final page.

Oh no! That's a shame. Pages don't turn, do you mean you couldn't change pages?. The final page is one that a character gives you, but I'm glad you got near the end, and that you liked the cuteness and voices of the game.

Yeah, that's the page I was referring to by "final page". I think there was like one page stuck on top, so that you couldn't see the pages changing behind it? Idk, it was a little odd, I'd open the book and it would be the same page every time and clicking the arrows to change pages wouldn't change the page that was visible.

I'm gonna fix that in the post-jam version.

I don't know how to play this without a mouse!

i have not understand how to play :-( i keep to see "you are not controlling any character"

You have to "read" the page about Goddiu and Chiquininín in order to talk with Goddiu and ask him for control.

Really nice and funny game. Classical old school point and click with super funny characters and sounds. Searching for the book pages is a good idea to learn the game. Kudos.

I'm glad you found it funny. Thanks for the kudos.