Linux is a wonderful mess.

If you do something else (please don't), read the Compatibility policy page.

Game engines like Unity take care of bundling any required libraries directly in their export - some of them will give you a folder that you can just compress and upload to itch.io, the app will install and run them, no questions asked.

For Unity in particular, you can use the 'Universal' export option that is similar to the manual method described below: 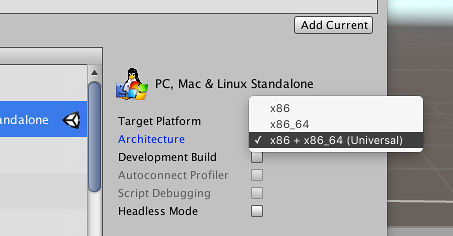 If you aren't familiar with Linux at all, the most effective use of your resources might be to let someone else handle it. There is a lot of knowledge involved, and if you're not the tinkering type, a lot of frustration in store.

Some people port games to Linux for a living — finding them online shouldn't be too hard. If you have a Publisher, they might be able to connect you to someone.1

If you're compiling binaries yourselves, either using a lower-level game engine, or coding your own, then you need to bundle the required libraries yourself.

This section describes one possible way to go about it - the details are up to you.

Simply put your assets, executables and libraries in a folder, and push it with butler.

Unlike Windows, 64-bit installations of Linux might not be able to run 32-bit applications, at least not out-of-the-box.

It's not that hard to ship both though, and here's one way to do it.

In the above, names ending with a / are folders, whereas other names are files

The assets folder contains music, sound effects, textures, level data, whereas the x86 and x86_64 folders contains an executable along with the dynamic libraries it requires.

The foobar file is a launcher script following this structure:

This script is a simplified version of the GameName.sh by Ethan "flibitijibibo" Lee

Finding which libraries you need to include

The ldd tool prints a list of libraries an executable depends on. Here's its output on the 64-bit executable of an example SDL2-based game:

The output is sizable, we can cut it down by piping ldd's output into grep:

In this example, the Linux installation on which this command was run is missing
SDL2 and GLEW. Adding those in lib64 folder, we can check that we didn't miss
any by setting LD_LIBRARY_PATH while running ldd:

The lack of output is a good sign! All libraries have been found. Indeed,
running the game with the right library path works:

Whereas running it without the bundled libraries crashes immediately:

Important note: glibc and libstdc++ are libraries you usually do _not _want to bundle. Just make sure your application doesn't depend on a version of them that is too recent (as explained below).

The same advice applies to most libGL*.so libraries — don't bundle your own graphic card's drivers!

If you're looking for an automated solution to the previous steps, you can use the copydeps tool to identify and copy all of your application's dependencies.

Note: While copydeps can save you the labour of manually finding and copying the shared object files, it's still heavily recommended to verify if the application runs correctly and whether you're not bundling any excessive libraries.

As a developer, you might be running the latest and greatest version of your Linux distribution - but your players might not.

Binaries compiled on recent version of Ubuntu, for example, might fail on older Fedora versions.

Part of the reason is the GLIBC version your executable is linked against. While bundling the dynamic libraries you use is relatively easy, linking against a different GLIBC version is a whole nother matter.

You can use this helpful homegrown script, glibc-check.sh, to print the GLIBC versions required by a binary or a dynamic library. Here's its output when run against the example game mentioned above:

By making sure that the GLIBC version your executable depends on is old enough, you'll ensure maximum compatibility with your players' sofware. Since it's hard to link against an older GLIBC version, there's a few different ways to produce your distribution builds (that don't involve rebooting)

You can use a virtual machine provider like VMWare Player, and have two Linux images, one 32-bit (386), and one 64-bit (amd64), so that you can produce both versions of your executables and all required libraries.

Take an old Debian (7.x for example), build your dependencies yourself in a prefix, and you'll be sure your game can run almost anywhere. You can refer to the Building Linux software into a prefix appendix to learn more about how and why do it.

The Debootstrap family of tools is particularly helpful for setting debian chroots.

Setting up your own build servers

It's not uncommon for medium-sized software to have its own build servers. Thanks to providers like DigitalOcean, it's not that costly either!

VPS (Virtual Private Servers) are basically always-on virtual machines in the cloud, that you can rent for about 5 dollars a month. If you release new versions of your game often, it might be interesting for you to set up some sort of Continuous Deployment infrastructure

See how we deploy itch continuously for an example.

Even when following all the advice in this page to the letter, mistakes are easy to make. The best way to make sure your game runs everywhere is to have people everywhere run it.

itch.io and the itch app make it easy to give other people access to a yet-unreleased game. Refer to the Distributing pre-release builds with itch.io guide for an overview of your various options.

Don't forget to mention testers in your software's credits. Testers can make or break software.

The MojoSetup approach is friendly both for manual installations and is a supported
installation method in the itch app.

Special thanks to Ethan Lee for proofreading this page and contributing advice.
See the Acknowledgements section of this book for a full list of contributors.