itch is continuously being built, tested, and deployed, to help us keep it high-quality and low on bugs.

To do so, we run our own instance of GitLab CI:

Since the main repository for itch is on GitHub, and since GitLab CI will only build projects that are hosted on a GitLab instance, itch and associated projects have pages on our GitLab instance:

Developers don't have to worry about the GitLab project page: they should clone the repository from the Github remote and push to it, as usual. The GitHub project has a webhook that POSTs a signed payload to a custom service, git-mirror, which fetches from Github and pushes to GitLab on-demand:

GitLab CI has a simple YAML configuration file, similar to Travis CI. Its format is detailed in the GitLab CI documentation, and can be validated using the CI lint page.

itch's CI config is relatively straight-forward, most of the complexity lives in individual shell scripts in the release/ directory.

The book you're reading right now is compiled from Markdown to HTML using gitbook on every commit.

It is then uploaded to https://docs.itch.ovh/itch/REF, where REF is either
a branch, like master, or a tag, like v0.14.0-canary.

As a result, the bleeding-edge version of this book is always available at:

The codebase is covered by a certain amount of unit tests, in src/tests.

On every commit, the CI executes all unit tests, and runs the TypeScript compiler in check mode to make sure that there are no compile errors.

The building scripts run some common steps on every platform:

The .desktop file is generated via release/X.desktop.in files + sed. All locale files are parsed for translations of the app's name and description.

deb & rpm packages are generated thanks to fpm, and uploaded to Bintray with dpl.

All artifacts are uploaded to the relevant GitHub release pages:

Our fork adds the -R command-line option, which replaces an asset if it already exists, and is necessary to retry failed uploads to GitHub (which used to happen a lot).

The automated pipeline only creates a release draft on GitHub - it still needs to be approved by a human before the update server starts serving it to users.

Similarly, Bintray packages are created in draft mode and have to be published by hand. The actual "ship it" process looks like:

When making large structural changes, it is sometimes useful to have a completely separate version of the app with no expectations of stability.

kitch is exactly that. It is meant to be installed in parallel of the stable app, and has a distinct branding (blue instead of itch.io hot pink), uses different folders (%APPDATA%/kitch, ~/.config/kitch, ~/Library/Application Support/kitch). 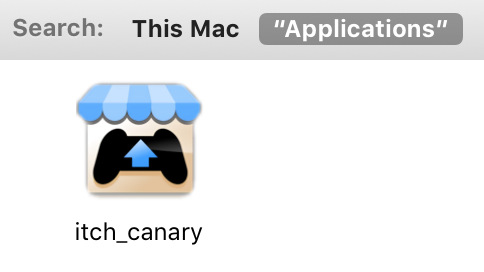 It can be downloaded either:

Note that releases appear out-of-order on the releases page, because GitHub associates them all with the same commit, since kitch is actually an empty repository.