Developing a game every two weeks: How the Sokpop Collective is turning gamedev on its head

The idea of making a game every two weeks for the foreseeable future stresses me out. How can anyone keep up with a breakneck pace? Well this cannonball run of game development is currently going down over at the Sokpop Collective. I got the chance to ask them why they insisted on making so many games, and how this marathon of game development was going.

Who are you and what is the Sokpop Collective?

Sokpop Collective is a group of 4 Dutch video game makers. We mostly work on our projects individually, but we have a lot of style overlap. Some might view us as a game developing boyband!

You’ve been launching a new game every other week through itch.io and Patreon. Why did you decide to make so many games rather than one big one?

The Patreon is basically a subscription, like a magazine except you get to play games.

It gives us the opportunity to make cool prototypes and try some experimental games that we probably wouldn’t be doing otherwise. We launch them on itch.io as well so they are still available for people who don’t want a subscription or came in too late. itch.io is really easy to use for uploading games quickly, which makes it perfect for us.

Mind you, we still have our big projects. Our Patreon works as a way to financially support the production of those, and to grow an audience before we do a big release.

How are you able to keep up with this breakneck schedule?

There have definitely been people announcing our inevitable burn-outs and I think we all agree that promising people to deliver every 2 weeks is just asking for it really.

However, it’s actually doable since we’re with the four of us. Every one of us “just” needs to make a game every 2 months. We try to cap the maximum allowed development time to a month so you have another month to fill in however you want.

We talked about it and saw this as a game jam, but instead of the 48 hours you get 2 weeks - 1 month time of development and still have a free month after.

I think when you look at it from this perspective it’s understandable why we think we can do it. 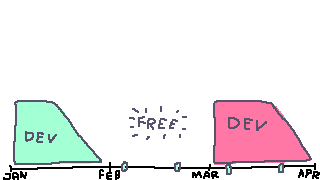 Programming can be very time-consuming, so sometimes we create useful tools or funny hacks to speed up development. For example, we have a shader for faking onion-skinning so it looks like there’s animation but we didn’t do anything. Tom recently made the tommiecore rendering pipeline(™) that we’ll use in future projects. And did you know Jut has an exactly 10.000 lines long script, or that Tijmen made a custom animation editor for Zoo Packs that generates code he copy-pastes?

Don’t get me wrong, forcing ourselves to even make something in 2 months has proved to be very challenging both mentally and creatively. If we don’t keep an eye on each other and try to stick to self set rules as much as possible this thing would have gone south by now surely!

Is there anything you’ve learned from making so many games so quickly?

A lot of things! Maybe the most valuable lesson is the one that we are still learning.

That is, how to create a physical environment and a mental state and establish a situation for yourself in which you actually do what you want to do. Just being motivated or passionate and having the tools/time or raw talent is nice, but there seems to be a lot of stuff that can distract you or consume you and you’ll never get to exercise that talent and motivation.

I’d bet a lot of developers/artists are familiar with this feeling of “I just want to make/do X, but I can’t because of (10 reasons)”.

To us that is the biggest challenge that we’ve been trying to overcome step by step for the past years. We do that by trying to help each other out - every week we have a talk about how everyone is doing - and reflect on ourselves as much as we can.

Now that the Sokpop range has expanded, do you have any favorites among the games you’ve made?

That’s a really hard question! They are all so different.

We asked each other and we have 4 favorites:

“Dino Game was just a perfect little sequence game to me. I love all those small interactions that feel so good.”

“Moeras had this amazing aesthetic that inspires me so much.”

“King of the Sandcastle to me was a precious experiment that reminded me of all the things we can still try.”

And finally “Huts seemed simple at first and then just became the most serene thing in which I want to tap into my childhood craving of building a base in a forest and be proud of it.”

What do you want the readers to know about Sokpop and gamedev?

Nothing in particular. We’ve only been doing the Patreon for half a year now and there’s still a lot more games to come.

We’ll allegedly have made 104 games in 4 years so let’s catch up by then!

My question is how does sokpop manage to create the pixel art style in games like feather fall and brume, but animate it in a 3d space in such a way where the player model, and npc models, can rotate in a fluid motion, all while maintaining the 2d appearance of each individual frame of these games?

i always wonder how does sokpop makes the artstyle, pixel-ish elements and all!!

You're a true inspiration for the two of alien us. Space love. Outer space socks. Bang! Boom!

Awesome! I'd love to get a game done every two months, I feel that would satisfy me. It's really good to see you guys have found a way to make this happen

nice read, that's one way to keep the creativity pipes from rusting ;)