sorry for being a grammar nazi, but Broningest?

I like how you created a new account to say the dev is lazy. In my opinion he already added a lot and the physics are actually fun to use.

A good developer would finish his game and not just make his ego grow with a video being on the fucking main page when all it is is just a game with some levels lazy levels and some guns thats  it not anything special fuck this game fuck the dev and fuck you :D

Guess what... this is a demo to show off the stuff he added... sorry bud but you should actually know what your talking about before you act like you know everthing and also making a account just to say f*** you is preeeetty weak. He did put lots of hours into this and its really well done for it just being a demo. People actually want to play this game, and some people like you hate it because of a "lazy dev" he literly made this to prove some random comment wrong. It wasnt probably suppose to be this big. He made something well done for some random comment, it was for fun. Also he been working on this game for a long time. Its coming out well and also he even is adding multiplayer! Who wouldnt love this game, I understand you don't like it but don't make a account to say f*** you, just say you don't like it and give your reasoning. Don't act like your opinion is always right, I said mine, now your turn. (don't act like a child, be mature)

Where does it say demo

Yeah, obviusly, the game was made for the video so... 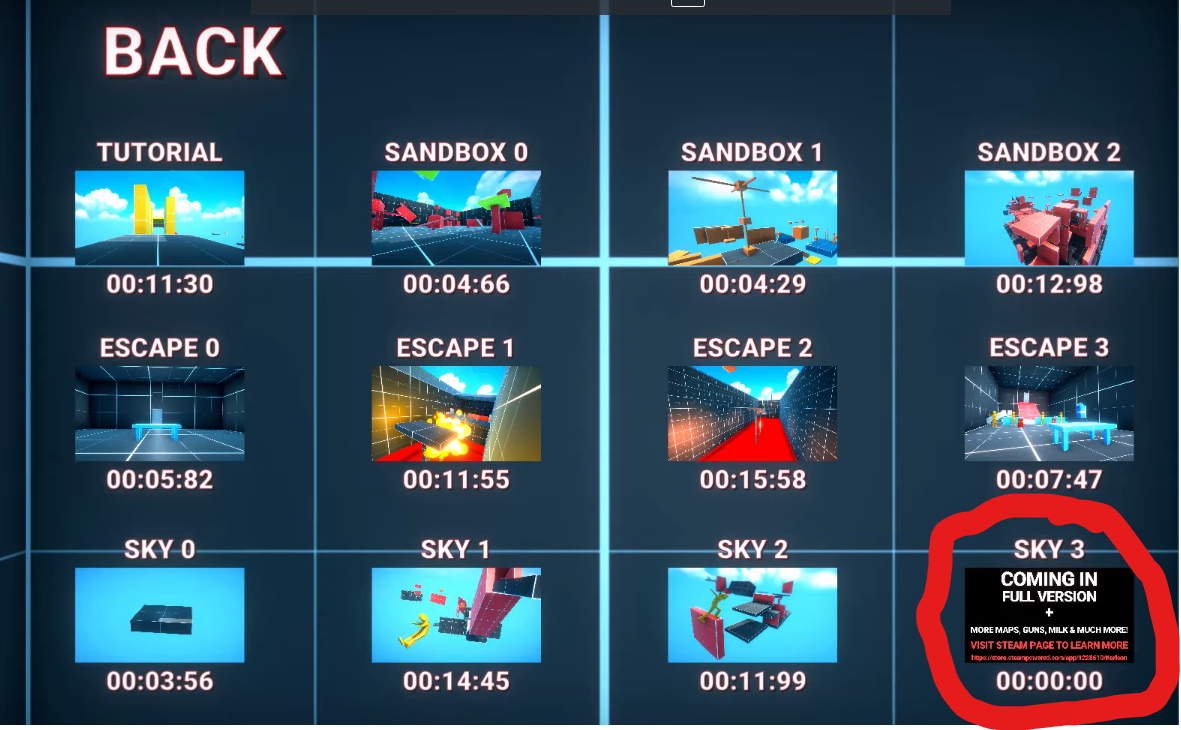 he got onto the front page cuz the game is fun

umm actually, his name is Daniel

havent you watched the video???

Then why are you even here?

dude man, its a demo its say in the fucking game and you dont even want to watch the video then go away

go away? I'm sorry I thought this was America

this is jail, dont drop the soap

bissy  incorrect spelling busy correct and aint is not a word

oh is it because i do not have this in beta

btw love how your name is happy

IF IT IS GOING TO BE RELEASED ON STEAM, THIS. IS. A. DEMO.

He wants to make people sure they want to wait for the release, you dumbass

if it's going on stead its going to be a demo

BITCH HAVE YOU EVEN MADE A GAME BEFORE

Yea, you make it like that to see if people like the game and if they do, continue with the project, quit hating

I love the people who waste their time trying to come up with a roast on a reply about a dev.  for 10 hours that a 5 yo could make in 2 sec

I find joy I n it

If you had any sort of brain, and had ever watched Dani's videos, you would know that he is finishing the game, and you can wishlist it on steam. He released an update video more recently:

He is adding more levels, multiplayer, and changing the grappling.

The game came out 2 months ago, and this is a lot for one person to develop on top of making other games and youtube videos. The reason that the updates aren't on itch is because the game will not release for free when it is finished
Reply
happy7419 days ago(+1)(-3)

If you actually cared about the quality of the game, you could have looked  for updates (the videos). You complain about the dev not working on the game without bothering to spend 30 seconds to find out if he is or not. Idc if you watch the rest of his videos or not, but you can't just expect to be spoon-fed info. You're allowed to dislike the game (you have yet to present any reason for this), but you can't say the game itself is inherently bad, because there are many good mechanics, and good gameplay. You certainly can't (falsely) accuse the dev of being lazy just because you're too busy throwing a tantrum to look for information - especially because YOU'RE the one that's too lazy to perform a quick google search. Get over the fact that the game won't be free, and decide whether or not you're going to cough up a few bucks for a game that is, and will be, quite good, and if you're not you can kindly remove yourself from this games community.

Bruh its supposed to be bad, its the first 3d game by him, if you dont like how he did it , dont say fuck you to everyone that likes it

im just trying to say is that this is his first attempt at making a 3d game, its probably better than anything you can make so just shut up

depending on the game engine

Stop being toxic, if you think you can do better than  him, prove us wrong and do better, if not keep your toxicity to yourself.

so making  a post is toxic and trying to have a discussion is toxic??? Okay you do you

You need to calm the f down.

Well, it seems like your just doing it to be negative, and you don't even show you can do better, or even know how hard it is to make a game at all. So you should take that into account.

Also, there is a difference between having a discussion and saying f everyone who like this.

ok good news I have found information  so for a recap

The game in beta

It's his first 3d game

You're argument was more aggressive than it should've been

I be more aggressive then

U try and make a 3d game u bitch and go get a life.

its easy its hard depending on the game engine un

Also stead. Learn to spell one of the world's largest platforms name. It's not stead it's steam learn to spell a first grade word dumb ass.

send me a screenshot of me saying stead

and the cycle continues lets hope this never ends.

Of all of the terrible, buggy, unfinished games on itch,  this is the most boring one?  You must be pretty lucky then.

And so far this is the most boring one

i like the game but i will back to play it too much like before when the new update arrives and put more levels :D

because i cant pass my record time

if you dont like it make a 3d parkour game better than this WITH UNITY and make it public in itch.io

and then we will see

that would be kinda true since I do like the game and although a lot of progress is made, it will probably take like months or years. I will most likely forget about it anyway :/. so you ain't wrong.

GET INTO FRCKING GAME DEVELOPMENT AND THIS GUY WILL BE A FRICKING GOD TO YOU NOW SHUT UP AND GIVE THE MAN SOME PEACE, HE DOES HIS BEST AND NOT ONLY IS HE A GAME DEV HE'S A GOOD ONE AT THAT! (for a bloody 1 man army tho)