An arcade-style puzzle platformer for your NES. · By ,

For lack of repetition , I've often left the subject off of the sentences in the following posts. Generally speaking, the subject can be inferred to be We (as in Łukasz and I), for coding-based tasks, Łukasz , and for art-based tasks, I (as in myself). In no way would I want to take credit for work I haven't done. :)

Nov. 14, 2017: Łukasz messages, informing me that he is working on a sequel for Gruniożerca, a game he had made for charity. He has basically entire game concept planned already:

Łukasz :
"I have fully flesh out the idea, but the basic premise is to have it a one screen platformer. Grunio will be able to collect special items. Once collected, he can materialize the bricks (Solid MetaTiles) so he can jump on them. In each level he must get a key and head to door. Each level also hold a carrot as bonus item. Collect a carrot in each level to get a special password at end game. Other objects would include something like a chair that Grunio can push and jump on."

Łukasz states that he intends to use open source background graphics but requests that I make the player animation.

Nov. 16th: Łukasz puts together the following mockup using this art from OpenGameArt: 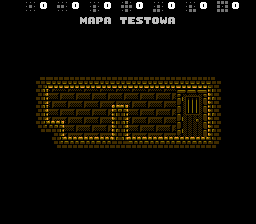 I start work on player animations, palettes, and theme (chew toys instead of bricks, etc.).

Nov. 19th: Grunio animations started. I struggle a bit differentiating him from a hamster or a dog. Eventually decide to embrace cartoon aspect of character in lieu of biological accuracy (for instance, moving Grunio's distinctive facial fur pattern to surround his eyes, allowing eyes to be visible in sprite).

Nov. 20—21st: Most gameplay animations have been made and included.

Nov. 24th: Dialog before every stage is added via quote screens.

Nov. 30th
Spot illustration made and label design started.
Decision to allow wider, free jumps and climbing is made. (Previous design plan would have  Grunio shake his head and refuse to jump if unable to land on a block with equal x value.  Would have greatly reduced platforming aspect of game.)
Arhn.eu fb page posts a preview image.
Teetering, tumbling, and falling transition animations added.
Teetering and stool present a challenge with unexpected interactions, prove to be a major dilemma. 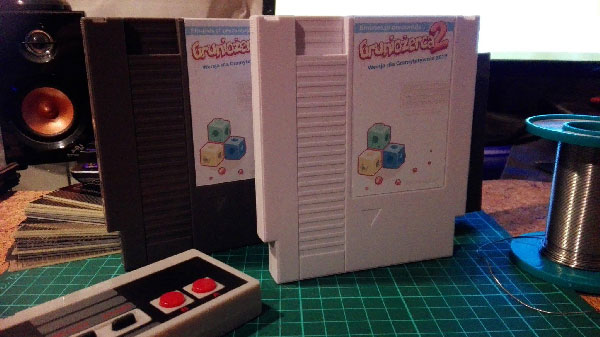 After considering removing either stool or teetering, conflict finally solved.

Łukasz :
"There are two detection points in front of Grunio. One is at one pixel ahead and second is 8 pixels ahead. These detect for the stool. This doesn't cover the full possible distance between a ledge and stool, yes. So if piggie starts teetering on ledge (stool is too far for piggie to walk onto it), hitbox for stool gravity collision will be resized down. This way we allow player to walk on a stool that's offset a little from the ledge and, when it becomes visually unplausible for piggie to cross over, we start teetering code."

This screen was used exclusively for the auction carts, as the extent of emunes's involvement was their physical production. Removal of it was also essential for trimming the ROM size down to 64K for NESDev Coding Competition requirements.

Dec. 5th
Emunes.pl uploads a game trailer to Youtube.
New explosion graphics created, replacing the final component of OpenGameArt that had been in the game.

Łukasz and I both seem to have been independently working on the ideas of disappearing blocks. He proposes something switch-based. I inform him I had already been working on graphics for something timer based. We decide to use the sliding shelves graphics I had made and set them up to A/B switches. Where shelves A start protruded and B retracted, activating lever toggles that.

Sliding shelves initially planned  as metatile swaps. Change is made to CHR-RAM updates instead.
Łukasz expresses difficulty in establishing new room designs. I agree to handle remaining maps.  Immediately consider implementing a type of metatile that player cannot place toys on. Have difficulty coming up with a visual theme for such a block.

Dec. 6th—7th
Horizontal and vertical flips added to explosion animation, based on direction of explosion chain.

This then implies justification for toy placement as being affixed to the wall (hence why they don't fall), but the bars not providing enough surface area for adhesion.
New problem arises with teetering. Proves to be quite a pain.
I have created my first room design, as shown below (This room would later undergo a number of revisions before final game.)

Note the temporary graphics used for level design. Edges are not automated, so all designs were first made with these temp graphics and playtested before being skinned with final graphics.

Dec. 9—10th
Łukasz proposed rooms with multiple keys. I create graphics for a mult-lock door, where additional locks would explode so that new door-opening animation wouldn't need to be made. Łukasz agrees to code in variable homing positions for keys based on number of locks remaining.

I believe we later decided to re-order locks.
New rooms created are being labeled A,B,C, etc. so as not to be confusing when reordered for final game. Aside from Łukasz' first 6 rooms, up to room F has been created. Łukasz  has provided room concepts which will later be used for three more rooms.
Collision bug which allows Grunio to climb into a wall discovered. Additional problems with stool-pushing arise.
Ability to jump from teetering added.

Dec. 11th
Decision to have explosions also update surrounding area for correct lighting and shadows as terrain changes is made. Problem arises that too many simulataneous metatile updates would crash game. To save further development time, decision is made to just run additional explosions to update these areas. Logically an issue, but looks cool because of more explosions.
Pausing during Cavyvision crashes game. Uh-oh!
I have become obsessed with the design of a single room, temporarily dubbed "hammer maze" (would later become Hammer Time in release version of game.) My goals for such a room were:

* the correct path provides exactly how many hammers the player needs.
*at least 2-3 choices where the player can choose incorrect paths (and run out of hammers)
* some bonus for the carrot (maybe a shortcut gives one hammer extra, or a seeming risk leads to something)

Dec. 12th—14th
Explosion graphics optimized. Previously, two frames of the animation had used 8 tiles each, with 4 tiles per scanline. After , every frame is 4 tiles only with only 2 tiles per scanline.
More stool and teetering issues arise and are taken care of.
Collision refined for better symmetry.
Password glitch discovered and fixed.
Nineteen rooms have been designed.

Dec. 15th—16th
Stool is fixed.
Multi-lock code for doors is added.
CHR data opened up by nudging freeing up tiles in Grunio's body that could be dupes of others at offsets.
It is decided that the best way to release the game would be by entering it into the NESDev Coding Competition.
Data is reorganized to allow a 64KB build to adhere to competition guidelines.
Random explosion instance isolated and corrected.
First instance of black-screen-of-death crashes occurs.
Only three rooms left to design.
The slowing of music while in Cavyvision is added.
Additional sound effects created and added.

Dec. 17th
Actively acknowledge game is not reflex-based, and use that to inform decisions of what to cut and what to leave, in terms of features. Ultimately resulting in a game with essentially no timing-based mechanics, only planning and and execution.
A crash-causing glitch exclusive to NTSC hardware arises late (as former testing had been done on a PAL machine), and corrected.
Added a push-back effect for placing a chew toy in an area only partially obstructed by Grunio.

Dec. 18th
A lot stages get revised.
There is some pressure to finish game from outside sources for Christmas. Eventually decide that a polished game after Christmas is better than a rushed one before.
Increased freedom of which player-modes when player can perform actions from.
Teetering unexpectedly pauses explosions.

Dec. 26th—30th
My wife completes a full playthrough of the game. Stated intent to kill me at a couple of the difficulty spikes.
Further room revisions.
Room titles and game dialog revised. Łukasz finishes translating game text into Polish.

(Strikethrough text denotes initial contemplation. These tracks will be used for Gramytatywnie release.  Alterations will be made later to fit into competition size restrictions.)

Łukasz
hm, by debugger, it seems music change gets interrupted by vblank. So while driver is making preparations for starting the music, it gets interrupted by nmi code-which also makes changes to famitracker RAM. Makes sense it would randomly and rarely glitch out. Luckily, there's an easy fix.

Jan. 2nd—5th
Łukasz adds even more sound effects, including squeaky sound for hammer. ^^
Archon provides voice sample used for Gramytatywnie version of game.
Discovered and fixed that starting a new game after viewing ending will crash the game.
Briefly consider going a kickstarter route for an extended version of game. Eventually decide not to, and let game stand alone as it is.
Bug discovered and fixed: passwords causing crashes. A side-effect of a recent bugfix.

Jan. 6th
Gramytatywnie auction winners' custom ROMs are sent to Emunes.PL.
Decision to enter NESDev competition is finalized. Work continues on branched-off version to get game back into 64KB restriction of competition.  These include: removing voice sample, removing one music track, Through the Sewers, Łukasz trims remaining tracks, additional
Discussion begins on a MGS:VR Missions-inspired level editor based on game engine.

Feb. 16th
I am interviewed for The Assembly Line podcast regarding the development of Gruniożerca 2.

Mar. 15th
NESDev Coding Competition results are posted. We barely managed first place with a score of 44.612, edging out the excellent Project Blue's 43.716.