When it says you can't own hurt when you hurt someone, I'm a little confused by what it's supposed to mean.

Thank you for the reply!

You could look into joy to key

Does the itch version come with a steam key?

Reminds me of Goof Troop

Neat idea. The spawning apples just kind of grew naturally out of trying to bombard the boat with something, so that's how that came to be.

Thanks for the feedback! Do you think the player has too much control, or is it something else?

Thanks! That's always the kicker for these kind of things, right? Need to be frustrating enough, but not too frustrating

Picked this up after itch advertised you on twitter, and I am a huge fan of Slay the Spire. I'm not great at these games, so keep that in mind. I can't get past the first boss, and I don't know how much is after that. I don't know if this level of difficulty is intentional or not, so I reserve judgement. I just thought it would useful either way to know that I find this very difficult.

I feel like all the best games, especially those inspired heavily by real life, come off as very educational.

A lot of fun and super original! I really like the take and it almost feels like it's supposed to be an educational game.

Thanks! Drew was the sound designer, so a lot of credit goes to him for that part.

Thank you, but the sword model is from the Adventure pack cited in the description. We did, however, modify it to take out the chips and have different stages for the shaping.

Sorry that the hammering feedback isn't up to snuff. It's a popular concern, and definitely something we're looking into going forward. Glad you enjoyed it in the end!

A lot of fun. I think it could stand to be a good bit more forgiving in the beginning. I really like the idea!

A ton of fun. Full 15 from me. I love how high the skill ceiling is. My only issues really are just bugs, like how you can get the same upgrade presented twice in one level, or how enemies can clip out of bounds and be invincible.

Thanks! We hope to flesh it out more if enough people are interested!

We definitely wanted more feedback, but we ran out of time. Such is the nature of Game Jams!

Smithing Daddy was made as a smithing game in the style of Cooking Mama, where instead of multiple recipes, you try over and over to get one sword perfectly right! 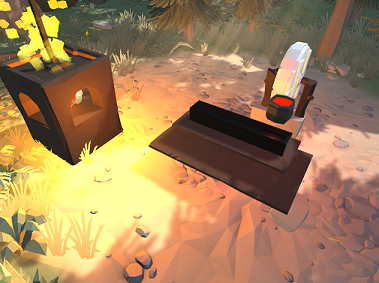 That was definitely a consideration with the button. It ended up being a nice bit of themeing, where the real 1 is supposed to be that you're doing one thing over and over until you get it right, but we didn't want it to be trial and error. It's supposed to be something you are completely able to get right the first time, but you just probably won't be good enough. Personally, it comes from my background of practicing combos and situations in fighting games over and over.
As to more stuff, we really wanted more, but it just ended up being out of scope for the weekend. I had a whole thing built up to use with the Marching Cubes algorithm to deform the model with hammer hits, we did a bunch of research on how tempering and quenching work, and the Marching Cubes bit was supposed to also hook in with enchanting it with mana and trying to handle the behavoir that comes with that, but we just didn't have the time.

Thanks! We had a great time!

Interesting take. The puzzles felt a bit moon logicky. Nice job getting it in so quickly!

Quite intense! An old style duel is a great idea for the theme, too!

Reply
GMTK Game Jam 2019 community · Posted in Any other 3D games out there?
Apple Boom1 year ago (1 edit)

Really cool idea for 1v1 rts. I'm a sucker for these kinds of games.

Really cool idea for 1v1 rts. I'm a sucker for these kinds of games.

I really like it! I can't seem to get arrows to work, though.

This is a lot of fun. I really like the polish on it. I don't understand how the level selection necessarily fits in the theme, but I really like it.